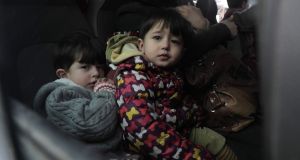 Seven years to the day from the start of Syria’s civil war, some 350,000 people are thought to have died and half the country’s 20 million population has been displaced internally or beyond its borders. That is roughly 50,000 deaths per annum, 4,000 per month or 300 every day.

President Bashar al- Assad’s war has run in several phases, first against rebels in many regional centres, then, from 2014, concentrating with other allies and antagonists on defeating the Islamic State jihadist enclave there and in neighbouring Iraq. That task was accomplished last year; Syria has become a deadly site of proxy wars between the regime’s allies Iran and Russia and a range of Islamic rebels backed by Saudi Arabia and the United States. The latest confrontations pit the regime against them in the Damascus outskirts of eastern Ghouta and in opposition to Turkey’s potentially dangerous military intervention in the oil-rich territory controlled by Syria’s Kurds.

The Assad regime has survived through all this death and destruction and looks set to consolidate its position if it succeeds by visiting more of it on Ghouta. That would not give it back control of the country but could prepare the way for a settlement based on a much looser Syria, a partition or, more likely, a further prolongation of the war until either outcome is more assured. United Nations-backed settlement talks in Geneva and Russian-sponsored ones in Sochi are frozen pending such military breakthroughs. Humanitarian efforts are gravely compromised and mostly go unheeded by the antagonists.

International efforts to end the fighting and inch towards a settlement that would allow Syrians rebuild, reconcile or separate are at an impasse as military and power objectives continue to drive the conflict. Yet they must persevere and try to imagine outcomes based on negotiations and compromise. As the balance of national and international forces changes on the battlefields, more peaceful voices may be able to demand a hearing and need to prepare for that moment. It may not be possible to bring all Syrians together again but they deserve an end to this destruction.