Irish Times view on the funeral of Lyra McKee 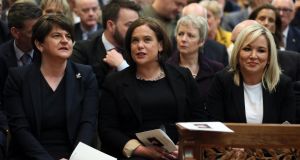 Delivering the homily at the ecumenical funeral service for Lyra McKee, Fr Martin Magill captured the public mood with pinpoint accuracy when he expressed the hope that her death will not have been in vain and could even contribute to the building of peace. But his message was at its most searing when he commended the North’s political leaders for joining together in the Creggan in Derry on Good Friday to express their horror at her killing. To a standing ovation from the congregation, he then asked bluntly: “Why in God’s name does it take the death of a 29-year-old woman with her whole life in front of her to get to this point?” Why indeed?

The killing of McKee has united people and politicians in revulsion and grief, and has exposed a cross-community determination that the North’s future should differ from the division and bloodshed of its past. That determination was reflected, in part, by the attendance in St Anne’s Church of Ireland Cathedral in Belfast of President Micahel D Higgins, Taoiseach Leo Varadkar, British prime minister Theresa May and her Labour Party counterpart Jeremy Corbyn, as well as the political leaders of all the Northern parties.

But for all its horror and futility, McKee’s death in itself will not break the impasse. Nor will it necessarily be the last such tragedy. Progress is dependent on a fundamental rethink by the leadership of the DUP and Sinn Féin. The presence of Arlene Foster and Mary Lou McDonald in the Creggan on Friday – and again at the funeral yesterday – encouraged some hope. But preliminary talks between Tánaiste Simon Coveney and political leaders in the North on Tuesday offered little by way of encouragment that the parties can overcome their antipathy and do whatever is necessary to get the powersharing institutions at Stormont up and running again.

Foster, McDonald and Sinn Féin deputy leader Michelle O’Neill are in pivotal positions to influence the future direction of the North; three women who could claim their place in history by helping to consign violence to the past. Sceptics point to obstacles in the way of a political initiative, including the upcoming local and European elections, the impending report into the Renewable Heat Incentive scandal, and the challenge of Brexit. Of course, there is nothing new about such hurdles in a political culture that has majored for so long on the negative; always a reason to do nothing or a political imperative for preserving the status quo, no matter the cost.

But Fr Magill is correct. Last week’s events could be a catalyst for change. In reminding people that if the North is not moving forward, there are those who will step in to drag it back, Lyra McKee’s death has galvanised the community in a demand for something different. It has created an opportunity for reconciliation if only political leaders are courageous enough to take it.