Fine Gael leadership: Enda Kenny to step down after Easter

There is general relief that Taoiseach Enda Kenny has clarified his intentions about putting in place a process that will see the election of a new leader of Fine Gael and a new Taoiseach. In a welcome – and inevitable – development, he gave a firm commitment to his parliamentary party last night that he will “effectively and conclusively” spell out his future plans on his return from the annual St Patrick’s Day visit to the White House.

Fine Gael TDs believe that, shortly after he gets back from Washington, Mr Kenny will step down as party leader and put in place a timetable for his departure from the Taoiseach’s office. Fine Gael will then get on with the process of electing a new leader while Mr Kenny continues to carry out his functions as Taoiseach. He will still be at the helm when the leaders of the 27 remaining EU members agree on the terms for negotiating the departure of the United Kingdom.

Once those terms are agreed the next phase of the Brexit saga, which is of such crucial importance to this State, will begin. It will be an opportune time to pass the baton to a new leader who will have responsibility for protecting Irish interests during the complex negotiating process between the EU and the UK that will, in all likelihood, last for a lot longer than two years. 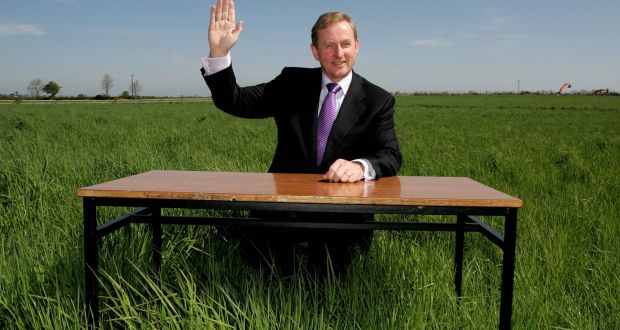 Mr Kenny has come to the end of his term a little earlier than he probably anticipated but it would have been foolish and damaging to the national interest if he had tried to hold on any longer. In any case he can hold his head high as he leaves the Taoiseach’s office. That is something that not all of his predecessors were able to do.

While he didn’t spell it out last night, his TDs believe Mr Kenny will formally step down as Taoiseach immediately the Dáil resumes after the Easter recess. That will be just a few days after his 66th birthday, the State’s official retirement age, which should mark an appropriate point of departure for him.

Who will succeed him in office is a question for the Fine Gael parliamentary party, councillors and party members. It will be the first time that the party leader has been chosen by such a broadly based electoral process and there is a responsibility on all involved to ensure that it is done properly. This is all the more important because the person elected as party leader will also be the next Taoiseach, assuming that he or she is approved by the Dáil.

Amid continuing uncertainty over Brexit and the outcome of the US presidential election, as well as an array of domestic pressures ranging from a rising public service pay bill to the risk of an all-out strike that could paralyse the public transport system, it is essential that Mr Kenny’s successor can lead a government that functions effectively. So-called “new politics” has yet to prove it can actually deliver.

The Irish Times view on the Ipsos/MRBI opinion poll: the vaccine bounce

The increase in support for Sinn Féin is spread fairly evenly across the country, with Dublin being its strongest region

The Irish Times view on children in the pandemic: assessing the damage

Covid-19 has made children’s lives worse, and a great many of them were already experiencing real hardship

Michael McDowell: True extent of new powers sought by gardaí a cause for concern

Covid and nursing homes
NWCI and freedom of speech
Climate Action Bill and climate justice
Varadkar and unification
Anti-Semitism
‘Mica scandal – a national reckoning’
Westport – the best place to live?
Stumbling bloc
Choosing not to have children
Getting from A to B

4 How to talk to the vaccine denier in your life