EU summit: UK must adjust to a new reality

For the EU, the worst case scenario is bad; for the UK, it’s catastrophic. 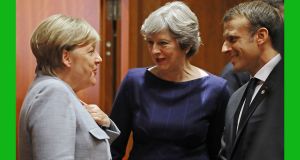 ‘The fundamental difference between the UK vision of what this is about and the Franco-German view is that the British still think this is a negotiation,” Pascal Lamy, the former director general of the World Trade Organisation, told the Financial Times this week. Certainly, six months into the Brexit talks, London appears not to have adjusted its expectations to reflect the cold reality it faces. In advance of the European Council summit in Brussels this week, the chief UK negotiator, David Davis, complained, as if some conspiracy were afoot, that the EU was “using time pressure to see if they can get more money out of us” – a reference to the EU’s refusal to move the talks to the next phase before agreement on the UK’s financial liabilities. Of course that’s what the EU is doing – using its vastly stronger negotiating position to make London pay its outstanding bills.

The EU has no interest in seeing the talks fail, but London’s claim that each side has as much to lose as the other is fantasy. For the EU, the worst case scenario is bad. For the UK, it’s catastrophic. While European leaders could do more to recognise the limited room for manoeuvre that prime minister Theresa May enjoys at home, the truth is that the British Conservative Party created its own problem by failing to level with its own public about the costs and the pain Brexit would entail.

So far, the Brexit talks have in effect been a slow march towards British acceptance of the weakness of its own position. London rejected and then accepted the talks timetable. At first it said, through foreign secretary Boris Johnson, that the EU could “go whistle” for its divorce bill, only for May to accept that the UK would honour all commitments it made as an EU member.

And where once the British held firm to the line that Brexit would happen definitively in 2019, May confirmed in Florence last month that she envisaged seeking a transition period of around two years.

That’s progress, but it’s not sufficient, as EU leaders confirmed at this week’s summit, to move the talks onto the next phase, which cover the future relationship. Of the three areas up for discussion in the first phase, substantial progress has been made only on one: EU and UK citizens’ rights post-Brexit. On the bill, London’s offer of €20 billion is far short of the EU’s demands, while on the Border in Ireland, the British have yet to explain how they propose to reconcile two contradictory positions: avoiding a hard frontier while leaving the customs union.

Nobody expected the Border dilemma or the size of the divorce bill to be definitively settled by now – that will have to await the final stages of the talks in 2019 – but it’s in Ireland’s interest, and that of the EU more generally, to draw London towards a more realistic and flexible stance before moving to the next stage.

1 How one couple’s weekend away resulted in 30 Covid-19 cases
2 Taoiseach tells TD to ‘cop on’ over criticism of contact tracers asking about pubs
3 The Comey Rule review: You actually begin to root for Trump
4 US presidential debate: who won, was it any good, were there any surprises?
5 Whistleblower warned EY of Wirecard fraud four years before collapse
Real news has value SUBSCRIBE