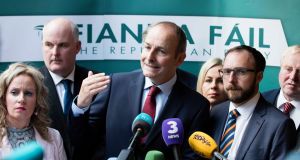 Fianna Fáil leader Micheál Martin with members of his parliamentary party at its autumn think-in in Co Longford this week. Photograph: Eamonn Farrell/RollingNews.ie

The Dáil returns today after a summer of unexpected political calm. When Leo Varadkar succeeded Enda Kenny as Taoiseach in June there was a wide expectation that the confidence and supply arrangement between Fine Gael and Fianna Fáil, which underpins the Government, might come under serious stress.

So far nothing of the kind has happened. While the two parties have staked out different positions on some issues in advance of the budget in three weeks’ time, no insurmountable problems have emerged. Varadkar’s scepticism about the value of the deal with Fianna Fáil seems to have evaporated now that he has manoeuvred his way into the taoiseach’s office. The manner in which Theresa May squandered her political capital in an unnecessary election in the UK earlier in the year has also had a salutary effect.

Nonetheless the crafting of the budget will be a test of the Government’s political skill. Minister for Finance Paschal Donohoe will have to tread a fine line between the competing demands of the various interest groups in society and the priorities agreed with Fianna Fáil. There has been a significant difference of emphasis between the two parties on some of the key budgetary issues. Donohoe has signalled his desire to increase the cut-off point for entry to the higher level of income tax while Fianna Fáil leader Micheál Martin has insisted that a reduction in the Universal Social Charge (USC) has to be the priority.

Some form of compromise is likely to emerge. Given that Fine Gael made the abolition of the USC a priority in its general election manifesto, some further reductions in the charge as it applies to the bulk of taxpayers is likely, whatever about changes in the tax bands. Martin has also demanded progress on housing and health, the two major issues facing the State, as the price of his continued support. Further focus from the Government on both problems can be expected but progress will inevitably be painfully slow.

Down the line either of those issues could provide Fianna Fáil with the excuse to pull the plug if and when the political omens for the party look favourable. But there is no sign the party is planning anything like that in the short term.

One issue on which the Government has been able to breathe a sigh of relief is public service pay. The decision of the Public Services Committee of the Irish Congress of Trade Unions to vote overwhelmingly in favour of accepting the terms of the latest public service pay agreement has provided certainty about one of the key building blocks of the budget.

Pay agreements between successive governments and the public service unions have played a vital role in dragging the State back from the brink of financial disaster. The decision of 80 per cent of union members to back the latest deal reinforces the argument for political stability.