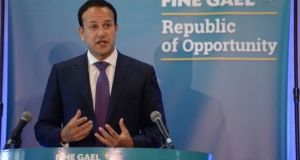 Taoiseach Leo Varadkar says middle income earners need a tax cut; but in a comparison of tax revenues Neri found that on a per person basis, combined taxes and social contributions in Ireland are significantly lower than in comparator high-income EU countries.

Ireland needs to “learn from the mistakes of the past” and shore up its finances, increase its spend on education, childcare, housing and infrastructure, and avoid cutting taxes on labour further, a trade union-backed economic institute has warned ahead of October’s budget, adding that tax cuts would limit the country’s capacity to “pursue social objectives”.

In a comparison of tax revenues across Ireland and other European Union countries, the Nevin Economic Research Institute (Neri) found that on a per person basis, combined taxes and social contributions in Ireland are significantly lower than in comparator high-income EU countries.

Out of 10 European countries, Ireland was shown to have the lowest per capita tax receipts of about €13,500 per person. This compares with almost €35,000 in Luxembourg and €15,000 in France. However, Neri did note that when it comes to consumption taxes, such as VAT, Ireland collects “a relatively large amount”, while taxes on capital are “comparatively average”.

“Indeed, with the exception of taxes on consumption we find no evidence that the Irish taxation system is onerous in comparison to other high-income European states. In fact, the evidence is clear that Ireland is a low revenue state,” the report finds.

It notes that one of the most substantial revenue deficits is in the area of employers’ PRSI, currently levied at a rate of 10.75 per cent, and “substantial reform was needed in this area.”

It means that cutting income taxes, an expected element of next month’s budget, with Taoiseach Leo Varadker recently committing to reducing income tax burden for middle income earners, should not be on the agenda Neri says.

Neri senior economist Tom McDonnell said: “In light of our ongoing revenue deficits, and given limited fiscal space and significant under-spends in crucial areas of spending like education, childcare, housing and infrastructure, the case for cutting taxes is extremely weak.”

Neri director Tom Healy added: “Tax cuts will limit our ability to pursue social objectives and will reduce our resilience to future economic shocks. We must learn from the mistakes of the past.”

Neri’s quarterly economic outlook also assesses economic trends and outlook for the economies of the Republic of Ireland and Northern Ireland, and finds “very little evidence, so far, of overheating in the Irish economy”, although it says that the short-term outlook remains positive.

1 My aunt never told us that Gran passed away with no will
2 Ryanair and Aer Lingus cut flights as travel restrictions continue
3 Johnny Ronan offered Bewley’s the option to buy Grafton Street building
4 Chambers Ireland warns July stimulus is ‘last chance’ to save the economy
5 Watchdog says retirement age should be 69 by 2040 to protect State finances
6 Political row brewing if Ireland loses its appeal on Apple
7 Seabren secures €5.7m from sale of Dublin 12 social housing units
8 Pension age warning, flight cuts and a big day for the Apple tax case
9 Failure to tackle pensions timebomb will have stark consequences
10 If it’s safe to do so, could this be the time to spend for Ireland?
Real news has value SUBSCRIBE