Catalonia: time for some creative thinking

If the Spanish supreme court releases Catalan independence leaders, their presence on the hustings could be a mixed blessing for their movement 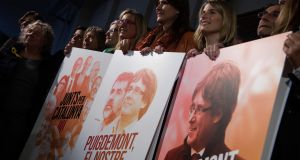 It has seemed increasingly unlikely, since the Madrid government imposed direct rule on Catalonia a month ago, that Catalan independence leaders ever had a coherent plan to turn their slogans into reality.

If they did, it can hardly have included the scenario at the Spanish supreme court last Friday. Catalonia’s former deputy first minister, Oriol Junqueras, and seven former ministers, have all been charged with sedition, rebellion and misappropriation of funds, and are in prison awaiting trial. They had been denied bail because the Spanish courts consider that they might, like the former Catalan first minister, Carles Puigdemont, flee the country. There is also concern that they will continue to do precisely what they have been imprisoned for allegedly doing: attempting to implement a unilateral declaration of independence, outside the law.

On Friday, they found themselves promising, before the very authorities whose writ they have been challenging for years, to desist from all illegal actions in pursuit of independence. Puigdemont had told them, from his self-imposed Brussels exile, to “do whatever they had to do” to get out of jail, to campaign in the snap regional elections, set for December 21st. If the judge decides to release them today, which is very likely, their presence on the hustings may prove a mixed blessing to their movement.

In prison, they provided a valuable rallying point. They could be cast as martyrs to a cause that has lost much of its lustre since Puigdemont’s humiliating failure to respond decisively to Madrid’s decision to impose direct rule. If they are freed, they will face a very tricky task: rallying and uniting a sorely divided movement, while avoiding repeating the slogan that many of their followers most want to hear – “unilateral declaration of independence”.

Such an utterance would immediately land them back in jail. Perhaps, though, they may be counting on just such a dramatic dénouement, in the hope that it would spur disillusioned Catalan nationalist voters to support them, and push the independence parties ahead of their unionist rivals, with whom they are tied in the polls.

The conservative Spanish prime minister, Mariano Rajoy, has certainly gained the upper hand for the time being. He called the elections at the same moment he imposed direct rule, and says that he will respect whatever government emerges, as long as it remains within the law. He thus created a safety valve for the anger many Catalans feel at losing their cherished powers of self-government, while he stopped the independence movement in its tracks.

No-one, however, emerges with distinction from this chaotic crisis, nor can we be confident that it is all over. Generosity and imagination, not flag-waving, is now urgently needed on all sides.

1 David McWilliams: ‘Ireland is three decisions away from being a perfect country’
2 Two in custody after Ryanair flight to Dublin forced to divert
3 Many people identified as close contacts refusing to come forward for Covid-19 testing
4 My aunt never told us that Gran passed away with no will
5 Mandatory quarantine and flight cancellations unlikely despite rise in cases
Real news has value SUBSCRIBE