Born 350 years ago next week, the author felt Ireland to be second-best but circumstances dictated he should take its part politically 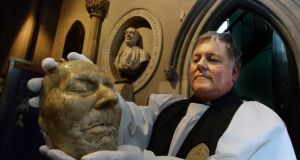 Jonathan Swift, born in Dublin 350 years ago next week, has the distinction of being a very robust and prolific political writer who is best known as the creator of a universally popular children’s story. Samuel Johnson, always keen to disparage Swift, wrote of Gulliver’s Travels that “once you have thought of big men and little men, it is very easy to do all the rest”.

Not so. The idea of an ordinary man becoming the slave and plaything first of tiny men (Lilliputians) and then giants (Brobdingnagians) was certainly one to capture the fancy of children. But it is not just the idea but the wit and imagination with which Swift exploited its comic and marvellous possibilities that have guaranteed the book’s huge success over almost 300 years. Gulliver’s Travels is more than a book for children, however. Gulliver’s third voyage provides matter for sharp contemporary satire, while the fourth, more darkly, features a noble horse-like race, the Houyhnhnms, ruling over a dirty and debased human-like one, the Yahoos.

Something of a misanthropist, Swift believed that humans, though capable of reasoning, were not essentially rational. He admitted hating “that animal called man” while loving individual specimens. His emotional centre was not Dublin but London, the seat of political power and home of his closest friends. But his career ambitions did not prosper in England and he fell back somewhat unhappily on his native Ireland and the deanship of St Patrick’s cathedral in Dublin.

While Swift felt Ireland to be second-best, circumstances dictated that he should take its part politically, which he did with some force in the Drapier’s Letters pamphlets of the 1720s.

His suggestion in A Modest Proposal (1729) that in response to endemic poverty and starvation, the Irish poor might sell their children to be cooked and eaten still has the power to shock. Too much anger can be a disabling force in a writer, as in a human being. In Swift’s case, however, his “savage indignation” at folly and oppression were disciplined by his outstanding intellect and literary skill to create a body of work of enduring value.

1 Ireland among countries urged to consider reinstating restrictions
2 Sinn Féin apologises as member resigns over social media abuse
3 Maura Higgins: ‘I really hated it. Apart from that massage, the rest of it can kiss my ass’
4 Fintan O’Toole: Turning a blind eye to meat plants a very old habit
5 ‘No demand... because there are no people’ at well-known Dublin pub
Real news has value SUBSCRIBE