After years of neglect, members of the Army, Naval Service and Air Corps deserve better 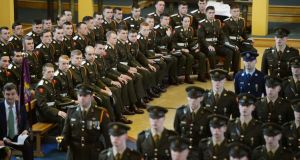 Numbers within the Army, the Naval Service and the Air Corps have fallen below 8,500, the lowest complement since 1970. File photograph: Alan Betson

Stinginess should not be confused with prudent financial management. In efforts to preserve a reputation for fiscal caution, the Government flirted with that challenge for years. It ignored the loss of personnel – because of inadequate pay – from all three branches of the Defence Forces and is only now prepared to address this direct threat to national security.

Numbers within the Army, the Naval Service and the Air Corps have fallen below 8,500, the lowest complement since 1970. Two of our eight naval vessels are tied up in port because of crew shortages; the number of pilots and technicians in the Air Corps has reached such a “critical level” that rescue operations are threatened, while there is a crisis in the Army because of poor morale and low pay. Funding for the Defence Forces fell by almost one-third between 2010 and 2015 and was accompanied by Army restructuring and the closure of barracks. A White Paper on future development was then published, but funding for this ambitious agenda was not provided.

As numbers continued to fall, the Public Service Pay Commission was asked by Government to review the situation. In line with its terms of reference, it recommended that allowances, rather than pay, should be increased, along with a special “loyalty bonus” for Air Corps pilots. The overall cost was put at €10 million. This was the equivalent of a one per cent increase in basic pay and there was concern within Government that the offer would be rejected. Because of that, when it meets later today the Cabinet is also expected to sanction future pay reviews for specialists and technicians within the Defence Forces and mechanisms to incentivise long-term retention of key personnel.

As a highly disciplined force, members of the Army, the Naval Service and the Air Corps are not permitted to take strike action or participate in public service pay bargaining. Successive governments have praised their loyalty and commitment but have largely ignored them during pay negotiations. Recently, in frustration, their wives and children protested outside the Dáil to draw attention to this unfair treatment. Arising from that, the Government is now prepared to countenance some negotiating arrangement involving the Irish Congress of Trade Unions.

Some people will complain that concessions on pay and allowances may encourage industrial unrest elsewhere in the public service. They could be right and in managing the public finances, the Government is confronted by huge uncertainty. But, following years of neglect and poor pay, members of the Defence Forces deserve better. Their mission: to protect the State, its airspace and territorial seas is serviced, often at some risk, on a daily basis. In this instance, the Government should take action, not because it is fiscally prudent, but because it is right.