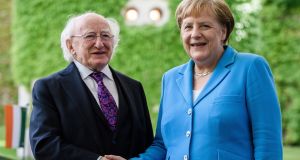 Ireland’s early diplomacy with Germany didn’t end well in 689 AD. Kilian, a Cavan-born missionary, annoyed a Würzburg noblewoman for suggesting she was an unacceptable bride for the newly-baptised duke. Her crime? She was previously married to his dead brother. Kilian and two Irish companions, Kolonat and Totan, were beheaded.

On Friday their crowned skulls – stored with great reverence in a crystal box in the altar of Würzburg Cathedral – were removed in honour of the visiting President Michael D Higgins. Some 1,330 years on from his fatal diplomatic faux-pas, Kilian is now the beloved patron saint of Bavaria’s Franconia region. More than that, he is the foundation stone of German-Irish relations.

The latest milestone came with last week’s State visit to Germany. The shadow of Brexit retreated by the hour as President Frank Walter Steinmeier, Chancellor Angela Merkel and Bundestag president Wolfgang Schäuble reassured Higgins and Tánaiste Simon Coveney that Germany was, is and remains at Ireland’s side on Brexit.

In Leipzig, as the first Irish head of State to visit the former East Germany, the President paid tribute to the peaceful revolution of 1989. He impressed a university audience by engaging with the Germany that has informed his own intellectual development. Building on previous keynote addresses, he warned that continued neglect of Europe’s social component would poison forever not just the continent’s integration project but also the global climate. Reducing Europe – its peoples, history and postwar integration project – to balance sheets, economic consumption and the pursuit of endless growth, he warned, represents a dangerous narrowing of the narrative.

A similar logic is worth applying to Germany, framed narrowly in recent crises, as the neo-liberal land of the one-way austerity autobahn.

This, too, is an oversimplification. Frankfurt, where Higgins ended his visit, is continental Europe’s banking capital. But it is also home to the postwar school of philosophy that brought forth a progressive school of inquiry into society and economy. Jürgen Habermas, an illustrious thinker from this tradition, remains, even at 90, a leading critic of the EU’s dominant neo-liberal orthodoxy. For Higgins, German thinkers like him are essential cartographers, mapping a future Europe that exists firstly for citizens, not markets.

As Ireland pushes a wider and deeper relationship with Germany – people, politics, culture and business – it is honouring a tradition that stretches from Kilian to Nobel prize-winner Heinrich Böll. In his beloved Irish Journal, Böll told Germans of a saying he heard in 1950s Achill Island: when God created time, he created enough of it. For Ireland, creating time for Germany last week was time well spent.