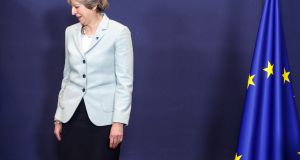 What Dublin is asking for on the Border should be well within London’s capacity to deliver: a declaration that there will be no physical Border in Ireland. Photograph: Dario Pignatelli/Bloomberg

Eighteen months after it voted to leave the European Union, the British government is finally forced to confront its scandalous failure to deal with one of the biggest dilemmas it has created: how can Ireland’s invisible Border survive a hard Brexit? Until now, London has dodged and waffled its way out of the discussion. It has cheerfully declared its opposition to a hard Border while pursuing a Brexit strategy whose key elements – withdrawal from the single market and the customs union – make the retention of an invisible frontier a legal and logical impossibility. Now, apparent agreement on the divorce bill leaves the Border as the biggest obstacle in the way of agreeing next month to move on to the next phase of talks.

London is playing with fire, and it seems not to realise it. The Border issue is about much more than trade. That 500km frontier is ground zero of a delicately-balanced and fragile peace; it is the hinge on which North-South relations, and by extension the east-west relationship, turn. Imperil that delicate balance, as the British are now doing, and we are thrust into a dangerous stand-off that has left Irish-British relations more strained than at any point in two decades. It should surprise nobody that the Government has chosen this moment to defend a vital national interest.

The widespread assumption is that the UK’s reckless handling of the Border question is due either to ignorance or incompetence. Behind the Government’s increasing alarm lies a third, unspoken fear: that London is deliberately leaving the Border issue on the table so as to use it as leverage to extract a better trade deal with the EU in the next phase of withdrawal talks. What Dublin is asking for should be well within London’s capacity to deliver: a declaration that there will be no physical Border in Ireland. This is already Theresa May’s stated desire. The problem is she and her government are ideologically opposed to the solutions that would guarantee it.

The obvious answer is to give Northern Ireland a special status and locate the Border in the Irish Sea. Unfortunately, the Democratic Unionist Party, on whose support the British government depends for its survival, places its own zero-sum conception of tribal identity above the interests of the people of Northern Ireland. DUP leader Arlene Foster asserts that Northern Ireland does not wish to remain in the customs union, when a clear majority of its voters opted to remain in the European Union. She resists special status post-Brexit, even though it would give Northern Ireland a huge economic advantage over the rest of the UK at a time when it needs every bit of help it can get.

Northern Ireland already has a special status; that was enshrined in the Belfast Agreement. Tragically, that agreement, and so many other achievements of the past 30 years, are now in grave danger of unravelling.