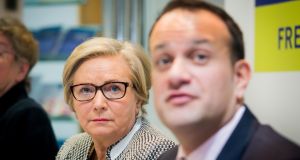 The resignation of Tánaiste Frances Fitzgerald takes a pre-Christmas election off the table, but it also sets the clock ticking on the Government’s lifespan and raises serious questions for the Department of Justice and Taoiseach Leo Varadkar. Photograph: Gareth Chaney/Collins

As of last weekend, the Garda whistleblower scandal had claimed a taoiseach, a minister for justice, two Garda commissioners, a secretary general at the Department of Justice and a Garda confidential recipient.

To that casualty list can now be added a second Justice secretary general and a tánaiste.

Frances Fitzgerald, the safe pair of hands installed at the head of the Department of Justice in 2014 to stabilise an organisation in turmoil, finally bowed to the inevitable yesterday and tendered her resignation. In doing so, she has averted a snap election that should never have been on the cards in the first place.

Fitzgerald’s fate was sealed on Monday evening with the release of emails that showed she was made aware of the aggressive Garda stance against whistleblower Sgt Maurice McCabe at the O’Higgins commission in 2015.

Even accepting the good faith of an honest politician and putting to one side the inaccurate information given to the Dáil in the past week, Fitzgerald showed a striking lack of curiosity about the most sensitive and incendiary issue in her brief. It would be a mistake to dismiss this as having been caused by a mere email, however; her departure from office is ultimately an act of political accountability for the grave injustice done to a good man at the hands of a security apparatus she led.

Not unreasonably, Fitzgerald, like Alan Shatter in 2014, pleaded for due process. But politics has its own logic and its own momentum. Fitzgerald’s departure had become a political imperative. It takes a pre-Christmas election off the table, but it leaves serious questions for the Department of Justice and Taoiseach Leo Varadkar.

The new emails provided yet another glimpse into the broken nexus between two dysfunctional and secretive organisations, An Garda Síochána and the Department of Justice. More alarmingly, their existence confirms that the department withheld crucial information from the Charleton tribunal on an issue that went to the heart of the tribunal’s work. That raises very grave questions and cannot go unexplained.

For Varadkar, just six months after his greatest triumph has come his political nadir. The past week provided the first real test of his judgment as taoiseach, and he failed it. He tried to call Fianna Fáil’s bluff by sticking by Fitzgerald and making a show of cranking Fine Gael into gear for an election it was clearly not ready to fight. What his strategy was is anyone’s guess. Even while knowing in advance of the new emails, he dug in. The writing was on the wall last Friday. By failing to see that, Varadkar has allowed his stock to diminish inside and outside his party.

A tumultuous week leaves the confidence-and-supply agreement between the Government and Fianna Fáil intact, just about. It may survive another few months, but make no mistake: the election countdown is now on.