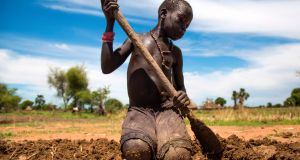 Nyibol Lual (13) works on the land in in Panthau, Northern Bahr al Ghazal, South Sudan. Parts of South Sudan are already in famine and there are fears regions of Somalia will fall into famine over the coming weeks. Photograph: Albert Gonzalez Farran/AFP/Getty

The scale of the humanitarian crisis unfolding in east Africa is unprecedented and demands an urgent response from governments and the public alike.

More than 24 million people rely on food aid due to a combination of drought and conflict. It is a scandal that in these days of technology and progress so many people can be left reliant on food aid to survive.

Parts of South Sudan are already in famine and there are fears that regions of Somalia will fall into famine over the coming weeks. Needs are also great in areas of Kenya and Ethiopia, where prolonged drought has severely disrupted people’s ability to grow food.

Somalia is facing the immediate prospect of famine after being struck by two consecutive seasons of poor rainfall. Areas in the centre and south of the country have registered only a third of their usual seasonal rainfall this year.

For communities solely reliant on the land for their survival, the absence of rain deprives them of any way to provide for themselves. The conflict that has plagued the country for more than two decades has compounded the situation.

This situation has contributed to an outbreak of cholera, with 51,000 cases and 782 deaths so far

The situation across the country is critical, with more than 6.7 million people in need of humanitarian assistance. An estimated 346,000 children under five are severely malnourished. Malnutrition rates have sky-rocketed – the number of sick children being treated for severe malnutrition has tripled in the last three months.

Across Somalia, an estimated three-quarters of all livestock have died, leaving families without one of their main food sources. Drought has also led to lack of clean water. More than 4.5 million people are estimated to be in need of water.

This situation has contributed to an outbreak of cholera, with 51,000 cases and 782 deaths so far. Tragically, this is not the first time Somalia has been in this situation. During the 2011 famine, the United Nations estimates that 260,000 people died in Somalia. There are fears that history will repeat itself.

Trócaire is delivering life-saving aid, including food and clean water. In May alone, Trócaire’s health centres in Somalia treated over 19,000 people for cholera and malnutrition and other associated issues.

The organisation’s staff say they have never seen the situation so bad. Throughout the region, Trócaire is reaching approximately 150,000 people through medical care, high-energy food and other much-needed support.

More than three million people in Kenya need urgent food aid urgently, with the number expected to rise to approximately four million by July. Among those in need are approximately 500,000 children under five.

Poor rains have led to crop failure in many regions of the country. The drought has led to an increase in food prices, while water sources have dried up. The reduced availability of food and water has led to large numbers of livestock dying, further reducing people’s access to food.

Two of the most crisis-affected regions are East Pokot and Turkana. Acute malnutrition rates in Turkana are 30 per cent – twice the level considered critical by the World Health Organisation. More than half of the children screened in northern Turkana were found to be acutely malnourished.

It is estimated that 42 per cent of families in Turkana now eat only one meal per day. Approximately 30,000 families have migrated from Turkana to neighbouring Uganda as a result of the drought.

These facts and figures shock us, but we must realise that behind these stark numbers are real people – families with hungry children unable to provide for them.

As Pope Francis has said, 'today we cannot be satisfied with simply being aware of the problems faced by many of our brothers and sisters'

Globally, this crisis has received very little attention. Appeals for aid are under-funded. For example, the UN has received just 37 per cent of the funding it needs to respond to the crisis in Somalia.

The world is distracted by the actions of a handful of powerful politicians, while in east Africa millions suffer in silence.

It is unacceptable for so many to go hungry. As Pope Francis has said, “today we cannot be satisfied with simply being aware of the problems faced by many of our brothers and sisters”.

Their cries demand our attention. Trócaire asks for your generous support to respond to this tragic humanitarian crisis.

1 Storm Dennis washes abandoned ‘ghost ship’ onto rocks off Co Cork
2 Dancing with the Stars has hit Father Ted levels of farce
3 Caroline Flack death: Public disquiet over media conduct grows
4 Storm Dennis: Thousands without power as wind warning issued
5 Life as a female TD: ‘If I had a euro for every time I’ve been called the C word’
Real news has value SUBSCRIBE