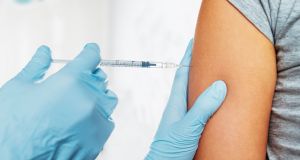 While I have every sympathy for those with sick children, this does not extend to condoning any attempt to undermine a vaccine which will save the lives of thousands of patients in years to come

Earlier this year I publicly proposed a new policy in response to reports of declining vaccination rates in Ireland. Specifically, I suggested that, barring exceptional medical circumstances, those parents who refuse to immunise their children should have their child benefit payments cut by 50 per cent

For the record, a similar initiative known as “no jab, no pay” was introduced in Australia in 2016. It has cross-party political support, enjoys the backing of the Australian Medical Association (AMA) and has produced a clear increase in vaccination rates.

Speaking in early May, AMA president Dr Michael Gannon said “no jab, no Pay is a success”.

“There’s another 200,000 kids that are protected as individuals, and that, in an exponential way, increases the protection afforded to other children in playgroups and schools from serious infectious disease.”

Regrettably, the attitude in Ireland is very different.

In the days following my proposals I was subjected to a sustained attack from various anti-vaccination campaigners online. Some of the commentary was vaguely sinister, with one character denouncing me as an “enemy of Ireland”, while contact details for my practice also began to appear on various social media platforms. There was at least one call for me to be “kneecapped”.

Others promoted the idiotic suggestion that I was in the pocket of the pharmaceutical industry, a perennial target for angry people in cyberspace.

The lunatic fringe also got involved with the implication that Today FM (where I had discussed the proposal on air with Matt Cooper) was somehow under the control of Freemasons, who presumably are running the whole global vaccination conspiracy.

All of this would be almost laughable were lives not at stake.

The indiscriminate power of the internet means that anti-vaccination campaigners can now reach an audience of millions. It is frankly disturbing that otherwise rational parents will allow such individuals to influence their decision to immunise their children. Yet this is exactly what is happening all over the world, most notably in the United States.

To be fair not all “anti-vaxxers” are paranoid conspiracy theorists. Some are instead fanatical believers in the pseudo-scientific drivel known as “alternative medicine”. For these people undermining public vaccination policy serves to confer legitimacy on their particular brand of quackery, thus reinforcing their own belief system.

However, perhaps the largest collection of campaigners on this issue are those parents of children who sadly suffer from unexplained illnesses often erroneously blamed on national immunisation programmes. This was seen most notably in the past with the spurious allegations surrounding MMR and autism, a thoroughly debunked and utterly ludicrous theory that still persists with enormous support on the internet.

Unfortunately a similar phenomenon is now occurring in Ireland with the efforts of a vocal group who believe the cervical cancer/ HPV vaccine (Gardasil) is dangerous and has harmed their daughters. The fact that more than 200 million doses of Gardasil have been given worldwide, with no evidence whatsoever of any link to chronic illness, is simply ignored in favour of a narrative that basically rejects scientific reality.

While I have every sympathy for those with sick children, this does not extend to condoning any attempt to undermine a vaccine which will save the lives of thousands of patients in years to come.

It is truly appalling to consider that uptake rates for Gardasil reportedly fell to 50 per cent of the target population last year. As a result, decades from now dozens of young Irish women will die unnecessarily from invasive cervical cancer, a horrific fact that no amount of internet outrage can deny.

Meanwhile, although it is easy for healthcare professionals to assign blame on this issue, I believe the attitude of Irish doctors must also be questioned.

I find it extraordinary that, unlike thousands of their Australian counterparts, very few colleagues in the State are prepared to openly support any link between immunisation and children’s allowance.

I fear a climate of extreme political correctness and an overwhelming desire to appear “non-judgemental” has influenced the response of many doctors to the growing irrational movement against vaccination. In the world of the modern Irish medical practitioner the only acceptable solution is to “educate” people regardless of how fixated and nonsensical their views may be.

When confronted with evidence that current methods are not working, the reaction of some colleagues is simply to demand additional “resources” (the popular medical terminology for “other people’s money”) for more of the same “patient education”.

In contrast, what I have proposed costs the taxpayers nothing, does not undermine existing health promotion efforts and has been proven to work in a nation with a health service far superior to our own.

In conclusion, we are already witnessing a looming future tragedy thanks to scaremongering surrounding the cervical cancer vaccine. I now fear it is only a matter of time before we see regular outbreaks of serious infectious diseases such as measles in this country, with potentially devastating consequences for vulnerable young Irish children.

The time for medical handwringing is over. Let us act now to save lives.

Dr Ruairi Hanley is a GP