Eamonn McCann: Arlene Foster wraps the orange flag around herself 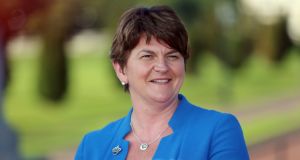 She was referring to Sinn Féin possibly emerging from the May 5th election as the largest party in the Assembly, putting Martin McGuinness in pole position to become First Minister.

“The next first minister will either be me or Martin McGuinness. It’s that simple. It is a choice between his vision of taking this province out of the United Kingdom and my vision to strengthen the union.”

All unionists should therefore come together to ward off the nightmare of a Bogside nationalist lording it over them even as he sets about crowbarring the North and the UK apart.

In fact, the political identity of the first minister has no bearing on the constitutional position.

Under the Belfast Agreement, Northern Ireland will remain within the UK until such times as a majority within the North decides otherwise – the unionist position since 1922, now formally accepted by all signatories to the agreement, including Sinn Féin and the SDLP.

On a day-to-day basis, sighed Foster, power sharing with Sinn Féin is no picnic. “But if you think it is difficult now, just imagine what it would be like with a Sinn Féin first minister...”

Neither can make a move without the other’s say-so. McGuinness has, anyway, pledged that if his party comes out on top on May 5th, they will re-designate the two leaders as “Joint First Ministers.” On the face of it, then, nothing that Foster was warning about can come to pass.

Of course, symbolism matters. Whatever about the practical implications, if any, McGuinness becoming first minister might roughen the resentment of unionists who have never fully accepted power sharing.

Foster’s pitch to the unionist electorate was – “Put us in to keep themmuns out.”

All unionists should vote as one. Communal allegiance should trump all. Concerns about policy or the judgment of party leaders should be held in check.

Last week, the (British) Independent published a list of 14 MPs whose Commons credit cards had been blocked by the Independent Parliamentary Standards Authority because of an absence of evidence that expenses charged to the card were genuine.

Eight of the 14 have since paid back the money in full. Paisley easily topped the Independent’s list of those still behind in repayments, owing £20,337,06.

Delegates embarrassed at the pickle Paisley found himself in kept their thoughts to themselves despite his being very far from popular within the party.

Nor was there mention of DUP Ministers, including then-leader Peter Robinson, meeting last year with personalities involved in the sale of Nama’s Northern properties to a US “vulture capitalist” group.

Wexford TD Mick Wallace had told the Dáil that £7 million had gone awol, earmarked for “fixers”, possibly including people connected with the the DUP.

Nothing either about the efforts of Robinson and then social development minister Nelson McCausland to persuade the NI Housing Executive in 2011 to restore a £7 million maintenance contract with east Belfast company Red Sky which had been cancelled following allegations of gross overcharging.

A DUP councillor serving on the NIHE board claimed party colleagues had put her under extreme pressure to support the Robinson-McCausland position against her judgment.

Many will recall the colourful saga of Iris Robinson, then a DUP councillor, MLA and MP, borrowing £50,000 from two DUP-aligned businessmen to help her teenage lover buy a cafe.

It had received planning permission at a Castlereagh Council meeting which she didn’t alert to her involvement.

There’s more of the same.

What’s more, there is significant support in the party for a more liberal approach to gay marriage and women’s rights.

And many are appalled and/or amused by Ministers’ belief in young earth creationism and the imminence of Armageddon.

It is hard to judge how opinion on these issues in the party breaks down. Members stay schtum lest they contribute to the shredding of the unionist vote to the advantage of republicans.

It is in this context that keeping Martin McGuinness out of the first minister’s chair can be accounted more important than matters which elsewhere might split parties and spell the end of careers.

Foster knows what she’s doing. Wrap the Orange flag round me, boys.