Eamon Ryan: Social housing on its own will not solve the housing crisis 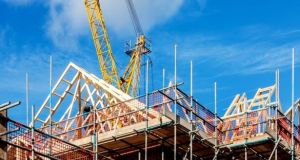 The question is whether Fine Gael is willing to change their housing plan or whether they will stick to a development model that we know is never going to work. Photograph: iStock

Our housing crisis is most acute in the rental sector. Dublin rents have risen 81 per cent since 2010 and across the country there are currently only some 3,000 properties for rent. Families are being forced into homelessness because they cannot pay what the market demands.

We desperately need more apartments but the Government’s housing strategy is overdependent on the private sector to deliver such supply. A developer-led approach will only push up the cost of land and bring back a dangerous property bubble.

There are currently 1,000 apartments being built in the Dublin docklands but most of these are already sold to international companies for the use of their staff. The Government must learn from the mistakes that London and San Francisco have made and avoid creating urban enclaves where public servants and low-income workers can no longer afford to live.

The provision of new social housing on its own will not address the crisis. It will have little effect in dampening price increases in the private sector and will maintain a two-tier housing system which is full of inequities and divisions. Subsidising private rentals in an attempt to make rent affordable, which schemes such as housing assistance payment and rent allowance do, will also not deliver. The Government’s current housing policy is hugely expensive and has done nothing to reduce market rates.

Thankfully, there is a model we can turn to which better meets our needs. It is called “cost rental” housing, which has worked in cities across Europe for decades. It was recommended for Ireland in a major study carried out by the National Economic and Social Council back in 2014. The name is descriptive because the rents are set at a level which covers the full cost of construction over the life of a long-term building loan. It is effectively affordable, high-quality rental accommodation, provided by the State or local authorities.

The properties are held in public ownership and cannot be sold on but the tenancy is open to everyone. In cities such as Vienna, such long-term rental options are the most sought after form of housing. Those who cannot afford the full rent are still able to get access to the accommodation by the state providing rental support to ensure the full cost of renting is paid.

This is a long-term solution because over time the state can build up an asset base, which can be used as collateral against further loans and investment. Because the cost of construction is fully covered by future rental income, the lending would not be designated by Eurostat as part of Government borrowing. This will allow construction to continue through a downturn and allow local authorities to plan for the long term, knowing that future funding is not at the whim of the minister of the day. It is a virtuous circle of housing provision.

The Government says it is supportive of the concept but has to date only introduced a small pilot “cost rental” scheme in Dún Laoghaire. We need to think bigger and alter the market in a fundamental way. The real prospect is to build out cost rental developments at scale so they become a significant part of the rental market and bring down the cost of rent for everyone.

The key to making it work is to keep the costs low on the new developments. We can do this by providing long-term, low-interest public loans, by going for large-scale projects which bring economies of scale and by lowering the cost of the State lands used in the development. The local authority or approved housing body could oversee the tender for the construction of the accommodation, which should avoid us falling foul of EU state aid rules.

The Department for Housing Planning and Local Government has already identified some 700 publicly owned sites which could be used for housing. A new National Regeneration Agency has been established to ring-fence and develop those lands for affordable accommodation. Everything is in place for us to make a switch to a more equitable, secure and affordable housing market.

The Green Party is introducing a motion in the Dáil this week calling on the Government to select two large sites that could be the first big locations for the rollout of this cost rental model. Cathal Brugha Barracks in Rathmines is 13.5 hectares in size and currently accommodates only 91 soldiers in residence. Broadstone depot on the northside uses over 10 hectares to park buses at night. They are ideal locations to develop high-quality, 21st century public housing.

Between the two sites, we could provide at least 3,000 new homes. They are close to the city centre, to public transport and to a range of other amenities. The Defence Forces would of course have to relocate to their other locations in the Dublin area and the State would have to provide an alternative depot for Bus Éireann. Both moves would present challenges but they should not be insurmountable.

The question is whether Fine Gael is willing to change their housing plan or whether they will stick to a development model that we know is never going to work. Going for the cost rental model would inspire an upcoming generation that they will have the chance of finding their own affordable home.

1 Donald Trump is in trouble, and that could spell very bad news
2 WHO changes face mask advice, saying people should wear when unable to distance
3 Tyrone midwife on the cover of Vogue magazine
4 Pubs reopening will not mean ‘fellas having a few pints and peanuts’, Holohan warns
5 ‘White Irish people have never had to think about this’
Real news has value SUBSCRIBE