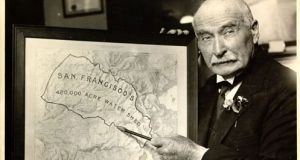 Arriving late on his very first day at what was then Queen’s College Cork, Michael Maurice O’Shaughnessy was told what a “calamity” it would be if he ever went on to assume the position of railway chief engineer, where timing was everything.

The Limerick man, who later transferred to Galway where he found professors more to his liking, went on to prove his early lecturer wrong more than once; in particular when he became city engineer of San Francisco and set about modernising a city that had its many structural weaknesses exposed during the 1906 earthquake.

Born into a well-to-do farming family in Loughhill, west Limerick in 1864, O’Shaughnessy, the third-youngest of eight surviving children, toyed with the idea of farming himself, but at the age of 16, his “ideas became unsettled”.

Discovering he had a natural aptitude for mathematics, he set his mind to engineering.

Though relatively unheard of in Ireland, O’Shaughnessy’s legacy lives on in San Francisco, not just through the imposing O’Shaughnessy Dam but also through the city’s street car system, water supply, tunnels, and even the Golden Gate Bridge.

His many engineering feats are now being celebrated by his NUIG alumni who were recently donated part of his archive by relatives in Limerick.

His memoir, which he began writing aged 30, provides a fascinating insight into his many projects and it, along with letters, photographs, plans and drawings, is currently being exhibited at the university.

Arriving in California in 1885, O’Shaughnessy initially struggled for work and had to borrow money from his cousin, with whom he had travelled to America, to tide him over. His luck turned the following year when he got a job with a small railway company and he later moved on to bigger firms and better salary prospects.

He notes in his memoir that the offer of his first chief engineering job, involving railway work for a mining project, surprised him because he was Irish and “they were English and Scotch”.

The Limerick man didn’t limit his work to California, however, and from 1899 to 1906 he worked in Hawaii, mainly as a consulting engineer for over 20 different sugar plantations. He initially went to the islands on behalf of an associate in California who wanted to know if it was worth investing his money in one of the plantations.

As archivist Aisling Keane, who worked on digitising the NUIG collection, notes, “over time O’Shaughnessy built up a reputation in Hawaii for precision, checking environmental factors, and taking a very scientific approach to his work by, for example, assessing the impact that sea water would have on sugar cane production, something that other engineers of the time weren’t doing.”

The San Francisco earthquake of 1906 shook O’Shaughnessy. It took a week for him to travel from Hawaii and he only found out that his family and home were safe when he arrived into the city and was greeted by a neighbour who told him all was well, which “brought joy to my heart and made me feel happy”.

By 1912, when he was running his own office in the city, mixing in political circles, and with over two decades of engineering experience, he was asked to take on the role of city engineer of San Francisco.

The move meant a drop in salary and he was initially reluctant to agree. However his wife, Mary Spottiswood, a native of the city, persuaded him to take it on in the name of public service.

For the next 20 years he took responsibility for the design and construction of projects worth millions of dollars. These included developing the city’s street car system, bridges, water supplies – such as the Twin Peaks Reservoir – and a number of tunnels, including the Twin Peaks Tunnel and the Stockton Street Tunnel, as well as extensions to streets and sewers.

He was also instrumental in the Golden Gate Bridge Bridge, commissioning the feasibility study and appointing staff to it, although the bridge wasn’t completed until after his death.

However, the project he is best remembered for in San Francisco is the Hetch Hetchy water scheme, which even today supplies about 85 per cent of Silicon Valley’s needs. The project, which took over 20 years to complete, involved constructing dams, reservoirs, power-houses and an aqueduct to bring water 269km from Yosemite National Park to San Francisco and the greater Bay area. Poignantly, the first deliveries of water to the city didn’t arrive until 16 days after his death from a heart attack aged 70, by which time he had been sidelined from city engineer to consulting engineer.

O’Shaughnessy no doubt relished the many challenges he encountered during his time at the helm, writing just four days before his death to a friend: “No Irishman you ever heard of has run away from a fight and I have had all the entertainment of that kind that any countryman of mine could desire in the last twenty years.”