Brexit limbo may be better than Brexit hell 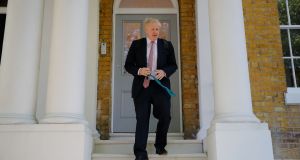 Conservative MP Boris Johnson leaves a house in London on May 30, 2019. In truth, Mr Johnson’s great wheeze amounts to nothing more than a pledge that Britain will crash out in October. TOLGA AKMEN/AFP/Getty Images

Enough. Britain must make up its mind about Brexit. Whether it’s crashing out, a resurrected deal or another referendum to settle the issue, the nation cannot remain trapped in a dismal nether world stranded between leave and remain. Halloween, October 31, is the deadline.

Really? It is true enough that Britain has made itself a laughing stock on the international stage. Clear also that the uncertainty is sapping the strength of the economy. But the closer you look, the harder it is to map the route that releases it from the present limbo. The nation is divided and parliament paralysed. Inertia suddenly looks the most powerful force.

Boris Johnson says otherwise. The frontrunner in the crowded contest for the succession to Theresa May has a plan. His pal Bertie Wooster agrees it is a wizard wheeze. Prime minister Johnson will head to Brussels with a list of demands. The self-styled heir to Winston Churchill will remind those foreign chaps that Britain won the war. The white flag will be raised over the Berlaymont. Mr Johnson will return to London clutching a very large cake.

I do Mr Johnson a slight disservice. The strategy is a tad more sophisticated than could be found in the pages of PG Wodehouse. Canvassing the votes of Tory MPs, he has assured visitors to his Westminster office he will first visit Paris and Dublin. He will charm French president Emmanuel Macron and Irish prime minister Leo Varadkar into submission. Brussels will then have no option but to rewrite the Irish backstop chapter of the withdrawal deal.

This is fantasy on the scale of Mr Johnson’s claim some time ago that Michel Barnier and his Brexit team would allow Britain to have our cake and eat it. We should not be surprised. During his spell as foreign secretary, officials reported that Mr Johnson’s response to inconvenient facts was to cover his ears with his hands and hum the national anthem.

The latest promise that by threatening no deal he will secure just such a have-cake-and-eat-it settlement is a transparent charade. The EU27 are not about to change their minds on the substance of the withdrawal agreement. In truth, Mr Johnson’s great wheeze amounts to nothing more than a pledge that Britain will crash out in October.

In the real world, the past three years have seen national polarisation serve as the midwife of political paralysis. No one should lament Mrs May’s fall. Her approach to negotiations, at once stubborn and inept, elevated an attempt to avoid a Tory split over any objective measure of the national interest. Remainers were scorned. She might just have got away with it. But then she squandered her majority in a badly misjudged general election.

While Britain voted by a slim margin to leave the EU, the only two things upon which parliament has yet agreed are that Mrs May’s deal is unacceptable and that Britain must not leave without a settlement. Labour leader Jeremy Corbyn takes a share of the blame for playing an entirely cynical game. But it was Mrs May who declared Brexit the property of the Tories.

Mr Johnson is far from alone among the Tory leadership contenders in advocating a complete rupture. The success of Nigel Farage’s Brexit party in the elections for the European Parliament has many rushing towards the wilder shores of English nationalism. But the Tory party still has a few sane pragmatists and in John Bercow the House of Commons has a Speaker determined to ensure that its voice is not silenced. That makes it hard to see how the Brexit fundamentalists secure a majority.

Another possibility, of course, is that Mr Macron’s patience will snap and the EU27 will rally in October around a French policy of refusing to extend the deadline. After the delusions and duplicity that have marked the British negotiating strategy you can see why Mr Macron’s frustrations might be shared. But an approach that would amount to Britain’s expulsion? I am doubtful.

Three years after the referendum vote it is still hard to grasp that even a decision as consequential as Brexit could tip the nation into such unbridled chaos. Divided at home and diminished abroad, Britain now confronts a lost decade. David Cameron, Mrs May’s predecessor and the author of the mess, is putting the final touches to his memoirs. What on earth will he say?

The EU has other preoccupations. The Strasbourg elections preview a change in the EU’s top jobs, including the presidents of the European Commission, European Parliament and the Council of Ministers, as well as head of the European Central Bank. It will be November before things are back to normal.

So the Brexit deadline most likely will be extended again. And then what? Well, a sizeable slice of the UK population will remain noisily unhappy. They will accuse all and sundry of subverting democracy. But the noisier they become and the further we travel from 2016 the more eccentric Brexit will seem to a wider audience. How long before Mr Farage is barricading the Channel tunnel while the nation talks about education and health, tax and crime?

Barring a referendum, doing nothing looks more and more like the default option. Better to leave the fight unsettled and talk about something else than to reopen constantly the old wounds. Perhaps limbo is not such a terrible place when the alternative is Brexit hell.