A midsummer like no other, with a nod to St John and flash of Star Trek 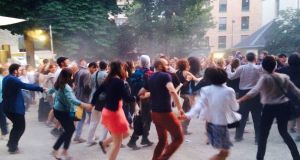 En fête: As I walked out from the Centre Culturel Irlandais (CCI) in Paris one mid-summer evening a few years ago, I discovered the extraordinary phenomenon that is Fête de la Musique.

A few years ago somewhere, I bought a copy of Laurie Lee’s Cider with Rosie, a classic memoir of English childhood in the years after the first World War. Then, as happens too frequently, I realised I had the book already.  It lurked unread and forgotten on my shelves, where the new copy joined it, also to be to be forgotten until recently.

It could be worse. At least I know I haven’t read the book yet. If I had and couldn’t remember, there would be more cause to worry. Maybe this is the year I will finally get there. And if so, I may also tackle Lee’s follow-up, As I Walked Out One Mid-Summer Morning. As a pair, they sound like perfect reading for the last weeks of lockdown. Cider With Rosie is about staying at home, essentially. The follow-up is about travelling in Spain.

As I Walked Out One Mid-Summer Morning takes its title from an old English folk song, also known as Banks of Sweet Primroses. Recorded by the Dubliners, among many others, it tells the story of a young man on his rambles who meets a winsome maiden and makes amorous approaches but is angrily rebuffed.

“Stand off, stand off, you are the false deceiver,” she chides: “You are the false deceitful man I know ’tis plain/For it is you that has caused my poor heart to wander/And in your comfort lies no refrain.” It turns out he has committed a faux pas worse than buying a book he already had. In this case, he has read the book too, but has no memory of it.  What a cad.

The classic Irish ballad of mid-summer, surely, is Spancil Hill, recorded by Christy Moore among countless others.  But as everyone knows, it’s set slightly later than the solstice. Hence the second verse: “Twas on the twenty-third of June, the night before the fair/When Ireland’s sons and daughters in crowds assembled there.”

Like many Irish celebrations, the horse fair at Spancil Hill was always on the 24th, St John’s Day, traditional mid-point of the Irish summer. And a version of the fair still survives in Clare – or did as recently as last year.

Alas, of course, the 2020 event has been cancelled. But the ballad may be even more apt this year because it is, after all, a tale of virtual travel. To quote the last verse (slightly amended): “The Cock he crew in the morning, he crew both loud and shrill/And I woke in Coronavirus land, many miles from Spancil Hill.

I was chatting (by email) with Barry Moore, aka Luka Bloom, earlier this week, who like many musicians these days is having to broaden his technological horizons.  His new working life is like “an episode of Star Trek”, he says, and as part of it he had just performed his first Zoom gig. There has been more than one Bloomsday/Zoomsday of late, it seems.

Luka’s most recent album was recorded in an actual theatre full of people in Antwerp last November. It was to have been launched in Kenny’s Bar, Lahinch on March 19th, by which time of course, pubs everywhere had gone dark. But I mention Lahinch because, in keeping with the spirit of Spancil Hill, his audience for the Zoom concert included somebody watching from the beach of another coastal resort with an LA in its name: the one in California.

As I walked out from the Centre Culturel Irlandais (CCI) in Paris one mid-summer evening a few years ago, I discovered the extraordinary phenomenon that is Fête de la Musique. Actually I discovered it in the CCI, where the cloistered courtyard had already hosted several hours of live music, Irish and French, with an audience dancing like dervishes.

But that was just the start.  Outside, the streets were hopping. On all four corners of the Pantheon, bands were threatening to wake the famous dead. They were also playing inside and outside cafes on the Rue Soufflot, on Boulevard St Michel. And so on, all over the city, into the early hours of mid-summer’s night.

When a subsequent instalment coincided with the Euro 2016 championships, I was delighted to see that the event had survived the terror attacks with no apparent compromise. But what the terrorists couldn’t do, Covid-19 could.

So many of this year’s concerts have had to retreat to Zoom, including tomorrow’s at the CCI. Although Ireland has been slow to embrace the now international festival, there will also be a live online event today featuring twin DJ sets in Paris and Dublin. The Irish set, by Sharpson, is “acid house/techno”. Spancil Hill is unlikely to feature.