Ruthless he was, but crude stereotypes do not do justice to the man or the times 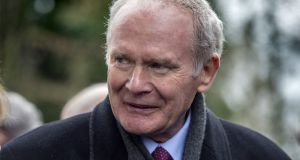 Martin McGuinness had a confidence, intelligence and empathy that stood out. But he also had a ruthlessness that was honed in the Derry cauldron of his time. Photograph: Brenda Fitzsimons

Martin McGuinness’s mother Peggy made great soup. So discovered Peter Sheridan, assistant chief constable of the PSNI and the most senior Catholic in the force in 2004 shortly before he travelled with chief constable Hugh Orde to Downing Street to meet McGuinness and Gerry Adams.

The peace process of the last two decades is replete with stories that underline formal and informal reconciliation, humanity, decency and little gestures

As recounted by Jonathan Powell, Blair’s chief-of-staff, in his 2014 book Talking to Terrorists, Sheridan had been given the soup by journalist Nell McCafferty in Derry the day before Orde asked him to travel to Downing Street. At the meeting Sheridan was able to shake McGuinness’s hand and tell him “your mother makes wonderful soup”. When he was serving in Derry, the IRA had blown up Sheridan’s car, killing other occupants, and he had been forced to move house three times because of IRA threats at a time when McGuinness commanded the Derry IRA.

The peace process of the last two decades is replete with stories like this that underline formal and informal reconciliation, humanity, decency and little gestures alongside reminders of the harrowing legacies and the difficulty of forgiveness, most obviously seen in this week’s thunderous statement by Norman Tebbit, whose wife was paralysed by an IRA bomb, suggesting hell would not be hot enough for McGuinness.

But the peace process has also generated political maturity, underlined by the magnanimous tributes to McGuinness by unionists David Trimble and Mike Nesbitt. The peace process has also underlined ironies, including the squeezing of the moderates who were instrumental in devising the frameworks that benefited Sinn Féin, while republicans found ways and words to square the circles of traditional republican demands and rhetoric.

McGuinness was important and effective because he excelled at that and had a confidence, intelligence and empathy that stood out, a reminder of the importance of personality in the dynamics of conflict resolution. But he also had a ruthlessness that was honed in the Derry cauldron of his time.

McGuinness came to prominence five decades after partition became a reality. With that partition, as Fermanagh and Tyrone nationalist MP Cahir Healy saw it at the time, nationalists north of the Border “had been sold into political servitude”. That servitude was the making of McGuinness as an IRA leader; his generation was a product of that broader context. They were not monsters and their mothers continued to make great soup for their beloved boys.

As Ian Paisley Jnr recalled during the week, unionists for a long time saw McGuinness as the personification of evil. The BBC faced a dilemma in 1985 when its programme Real Lives: At the Edge of the Union was made profiling McGuinness and the DUP’s Gregory Campbell, at home with their families and doing their constituency business as NI assembly members.

It portrayed them as loving fathers; both were described as “young family men, teetotallers, church goers” (some clues there as to why, later, McGuinness and Ian Paisley could bond). McGuinness said “he did not see the ballot box as a substitute for the armalite rifle”, while Campbell remarked, “the only good IRA man was a dead one”. Under intense political pressure, the BBC board of governors voted to ban the programme insisting it was sympathetic to the IRA.

As recorded by historian Rob Savage, the lone member of the board who opposed the decision was the Welsh member Alwyn Roberts. He said the film scared him, “as the reality of Northern Ireland scared him . . . he felt the programme would educate and inform a mainland audience about the intractable nature of the Ulster problem, and would not lead anybody to believe there were easy solutions”.

BBC staff and journalists staged a walk out in protest at the ban; there was also political uproar and eventually the programme was tweaked and broadcast, with little public reaction or protest, but it was one of many controversial episodes that ultimately resulted in the broadcasting ban on the voices of paramilitaries.

Undoubtedly, during these decades, there were disastrous and vindictive strategies from republican warmongers that unnecessarily prolonged and coarsened the conflict, but on the British side there was also duplicity, brutality and crude stereotyping, and censorship did not help. An assessment of the IRA written by intelligence specialist Brigadier James Glover in 1978 observed “our evidence of the calibre of rank and file IRA terrorists does not support the view that they are mindless hooligans”. Authoritative surveys of republican offenders made clear they were “reasonably representative of the working class community of which they form a substantial part . . . they do not fit the stereotype of criminality which the authorities have from time to time attempted to attach to them.”

In his autobiography, Blair recounts how he came to like Adams and McGuinness, but that “both could be clever and manipulative. So can I”. In the fullness of time, dissecting the legacy of McGuinness will need to do justice to all these layers and impulses, on both sides of the Anglo-Irish divide and within Irish republicanism.