World View: Martin McGuinness and the real nature of terrorism

Terror is the weapon of those who believe they would lose, or are losing, a traditional military trial of strength – it’s the response of the weak 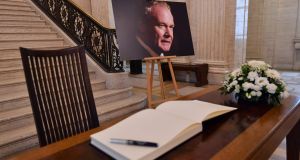 Realistic rejection of violence: an image of Martin McGuinness next to a book of condolences at Stormont this week. Photograph: Ben Stansall/AFP/Getty Images

Objectively speaking, as the Marxists like to say, the attack on Westminster Palace was, in strictly military terms, of no significance, a pinprick. That is not to be callous about the deaths and real pain inflicted by Khalid Masood on innocents, or about a morally repugnant act, but simply to observe that, despite the understandable media hullaballoo, this strike on the mother of parliaments was of no strategic import. The hullaballoo was the purpose, and in that the attack succeeded.

In traditional warfare, in the wake of a military engagement we can measure a loss of ground, a shift in the balance of forces, or a weakening of one side or another through the defeat of its forces or commanders. We can see a step forwards or backwards in relation to the ultimate objective of toppling a regime.

On Wednesday, as Simon Jenkins observed in the Guardian, urging a more balanced sense of perspective on the attack, “All that can be said is that the attacker failed to enter parliament itself. Bystanders were killed and injured, but the massive security inevitable for such an institution was effective in protecting its occupants. In a busy modern city there is no way absolute security can be assured, but the police can say that the system was tested and worked.”

The success of terrorism, the “propaganda of the deed”, must not be judged against traditional military standards, as we are too often tempted to do. Its dynamic and purpose are profoundly different, a political/psychological, not military, tactic, though military means are used.

How we react to events such as the attack on Westminster Palace is in the end more significant to its “success” or effectiveness in the eyes of its perpetrators than the scale of bloody carnage they manage. The tone set by journalists and the media is hugely important in putting such attacks in perspective, but the dynamics of modern competitive news-gathering and its echo chambers make the challenge of calm assessment almost impossible.

As a strategy, terrorism’s rationale is above all about creating a climate of fear and a sense of insecurity, to shock, inspire, enrage and provoke, hopefully drawing others into action through the power of exemplary daring as much as through any message. It is about advertising a grievance, often one originating far away, and goading the hated oppressor into over-reaction, measures that will feed new recruits to the cause. And sometimes it is about nothing more coherent than providing angry young men with a vehicle for striking back against oppression, an inchoate venting of anger.

But, ultimately, terrorism, a strategy that initially emerged from anarchism in the 19th and early 20th centuries, and that is the ultimate form of asymmetrical warfare, is the weapon of those who believe that they would lose – or are losing – a traditional military trial of strength – it is the weapon of the weak.

Belated recognition of that reality, and specifically that neither the IRA nor the British army could ever win a decisive military victory over the other, was key to Martin McGuinness’s willingness, enthusiastically and effectively, to embrace a road to peace. His was not a Damascene moment or a conversion to democratic politics, but a pragmatic calculation by a revolutionary that the military road would not work.

And there remains still today an ambiguity perceived by many voters about his and Sinn Féin’s attitude to violence that has continued to cast doubt on its acceptability as a party of government.

The armed campaign had, by the mid-1990s, long since turned from being an ostensible attempt, never really credible except to the most committed republicans, to throw the British out – and militarily successful in excluding them only in parts of rural Fermanagh and, briefly, in Derry – into a successful staking of a claim to a place at the negotiating table. The bombing campaign, in Britain in particular, was little more than a cynical attempt to keep the “war” on the front pages of the British papers and high on the agenda of British politicians.

The political scientist Richard English, who has written extensively on the IRA, is quoted by Jenkins, warning rightly that the so-called threat to democracy, about which politicians like to talk at such times, lies not in any bloodshed and damage. It is the more real danger “of provoking ill-judged, extravagant and counterproductive state responses”.

In the wake of the Brussels bombings a year ago, Jenkins recalls, Donald Trump boasted to cheering supporters, no doubt to Islamic State’s delight, that “Belgium and France are literally disintegrating”. Somewhat premature.