Derek Scally: Germany is here, Berlin is back

It was not in London, Paris or Brussels but in Berlin that George Osborne gave a sneak preview of UK’s EU reform demands 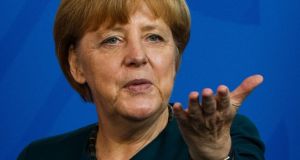 Nigella Lawson is not a regular in this column, but she has a nose for trends and her latest trend is Germany. In a review of her latest show, I read with amusement that she was raving about Dinkelbrot, German spelt bread. A few years ago it would have been unthinkable that something so German would, thanks to Middle England’s domestic goddess, have appear on British and Irish dinner tables.

In the same paper I noticed a rave review for a biography of Alexander von Humboldt. Born in 1769, Humboldt was the Charles Darwin and David Attenborough of his day. His life is a remarkable tale of travel, discovery and adventure so how, the reviewer asked, had he been forgotten.

As someone who passes Berlin’s Humboldt University daily I can assure you Humboldt has not been forgotten. Perhaps the question should have been: why did the English-speaking world forget about Humboldt?

I found an answer in a Wicklow hotel recently: a 1929 Encyclopaedia Britannica in which Humboldt was given a generous page and a half. Pulling out the “G” volume, Johann von Goethe, Germany’s answer to Shakespeare, got a staggering five pages.

Goethe and Humboldt were never lost to Germans but, in a case of historical fog cutting off the continent, these great men and their homeland were obscured to us by two Hs not yet in the 1929 encyclopaedia: Hitler and the Holocaust.

A quarter century after German unification, the fog is starting to clear. Berlin has become the place to go in Europe if you have something to say or a kite to fly.

It was not in London, Paris or Brussels last week but in Berlin that George Osborne gave a sneak preview of the UK’s EU reform demands later unveiled, in identical form, by David Cameron. Osborne’s Berlin reform appeal was to British and German shared values – mutual respect, a tolerance of difference, a readiness to embrace reform – but he packaged it in a German word: Wertegemeinschaft.

Many Germans view that as another take on the speculative, no-win logic that first emerged during the euro crisis: if things in Europe end with a bump – and they will – it will be Germany’s fault.

Not everyone’s vision of the EU is so bleak, though almost all agree Germany will play the key role. On Monday, European Council president Donald Tusk marked the anniversary of the fall of the Berlin Wall in 1989 with a thoughtful speech on the refugee crisis.

He encouraged his German audience to shake off their historical shadows and trust the path taken in the migrant crisis by the chancellor, Angela Merkel. He also called on the rest of Europe to respect the signal she was sending – and follow suit.

Europe’s future, he said, hinged on Germany’s approach to the migrant crisis and both Germany and its leader were “examples of the best European tradition”.

It was striking to hear this senior EU official praising the bloc’s largest member for disregarding EU rules to allow Syrian refugees to leave Hungary for Germany.

It is also significant as he comes from Poland, a land that suffered perhaps like no other in the last century of another kind of German leadership.

As a young man Tusk cut his political teeth in the Solidarity movement that forced a negotiated transition to democracy. Solidarity remains the essence of his political life and it was in today’s Germany, he said, that he saw people who understood the real-world meaning of solidarity.

“Solidarity is an ability to sacrifice part of one’s own interest for the common good, which is Europe. Or for the good of the people in need, that is the refugees,” he said.

By being pragmatic in the face of an unprecedented crisis, it said, Merkel proved herself a more principled politician than her EU peers who, in the face of a looming humanitarian disaster, pointed to the rule book and refused to take significant numbers of refugees.

Five years after Germany’s partners raged at Berlin’s pedantic approach to the euro crisis, it must be asked: who is being pedantic now?

If Dinkelbrot and Humboldt are signs of a readiness to engage with Germany and if Tusk praises its European solidarity, perhaps it’s time to call time on those wringing their hands and muttering darkly of German domination.

Germany is here, Berlin is back. And if you don’t believe me, just ask Nigella.