At least 10,000 species disappear annually. We will pay a high price for this biological annihilation 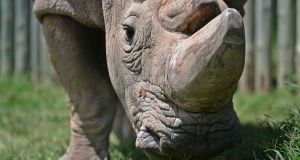 The last male northern white rhino has died in Kenya at the age of 45, his keepers announced on March 20th, 2018, leaving only two females of his subspecies alive. Photograph: Tony Karumba/AFP/Getty Images

Nature is falling silent. From the once-common cry of the curlew to the roar of lions, buzzing of bees and the cacophonous chatter and chirping of countless billions of creatures and critters, now an ominous, ever-expanding wave of stillness is spreading across the natural world like a slow tsunami.

This week’s news of the death of the world’s last remaining northern white rhino in Kenya caused a mild ripple of interest in an ocean of public indifference and incomprehension. While everyone agrees it is sad that another iconic species has disappeared, media attention quickly shifted back to “the real world” of economics, politics and social media.

At the dawn of the agricultural era some 10,000 years ago, humans accounted for just 1 or 2 per cent of the mass of land mammals on Earth. Today, we and our livestock and pets comprise in excess of 97 per cent of the world’s mammals by weight. A solitary species has, in a heartbeat of geological time, overturned and routed half a billion years of evolutionary history.

This new era, known variously as the Anthropocene or the Sixth Extinction, has been gathering pace over the last century, but has exploded into its exponential phase since around 1970. In less than 50 years since then, vertebrate populations of wild animals have declined by nearly two-thirds, while in the same period, human numbers doubled and global GDP quadrupled. This vast increase in human prosperity was made possible by rapidly plundering the natural world for “resources” for our consumption, while using it a dump for our wastes.

Every year at least 10,000 species disappear forever, a rate some 1,000 times higher than the natural or “background” rate of expected extinctions. While the disappearance of a telegenic giant such as a rhino makes the news, most extinctions occur stealthily, their significance only grasped in hindsight.

Last October, a landmark study of flying insects in Germany revealed their numbers had plummeted by an astonishing 76 per cent in just the last 25 years. Prof Dave Goulson of Sussex University, a member of the research team for the study, noted: “Insects make up about two-thirds of all life on Earth, but there has been some kind of horrific decline…we are on course for ecological Armageddon. If we lose the insects, then everything is going to collapse.”

Wipe out bugs, and bird populations are doomed. A study published in recent days on French farmland birds tracked catastrophic collapses in populations right across Europe. Agricultural practices, including the intensive use of herbicides and pesticides to support monocultural farming “is turning our farmland into a desert”, Dr Benoit Fontaine of France’s Museum of Natural History told the Guardian newspaper. “We are losing everything, and we need that nature, that biodiversity – agriculture needs pollinators and the soil [needs] fauna. Without that, ultimately, we will die.”

Despite its carefully cultivated “green” image, Ireland is well on the way to being another biodiversity wasteland. “Overall, I think the situation here is dire,” ecologist and author Pádraic Fogarty told me. “People think the extinction crisis is happening somewhere else, but it’s here as well.” Fogarty’s research has pinpointed some 115 species that have become extinct in Ireland since humans first arrived here.

Greed and unsustainable practices have destroyed much of our once-rich marine life, with the oxymoronic “sustainable intensification” of agriculture taking us down the same path, he reckons.

More than 90 per cent of Ireland’s supposedly “protected” habitats, which include native grasslands and peatlands, are in poor condition, according to the 2017 National Biodiversity Forum. It tracked major declines in already threatened bird species, while noting that one-third of Ireland’s wild bees face extinction.

The forces driving this collapse in biodiversity include intensive agriculture, commercial forestry, peat cutting, invasive species, water and air pollution as well as the ongoing disruption to natural systems caused by climate change.

From mountain tops to the ocean floor, every ecological niche on Earth is facing extinction crises. Some of the better-known critically-endangered species include orang-utans, mountain gorillas, Amur leopards, Sumatran elephants and tigers, vaquitas, turtles, bluefin tuna, penguins and many species of bats, frogs and butterflies. Most are in truth already functionally extinct, having lost so many numbers and so much habitat.

A paper in the journal of the US National Academy of Sciences last year introduced the term “biological annihilation” to describe the rate and scale of global biodiversity loss. One of the study authors explained the choice of words: “The situation has become so bad it would not be ethical not to use strong language,” according to Prof Gerardo Ceballos. The study concluded: “Humanity will eventually pay a very high price for the decimation of the only ass

emblage of life that we know of in the universe.”

To find any historical analogue for today’s epic global mass extinction event you have to go back 66 million years, to the moment a massive asteroid, 10-15km in diameter, slammed into the Yucatán peninsula in Mexico, wiping out 80 per cent of all life on Earth. Buckle up: this time, we’re the asteroid.