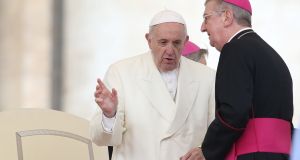 Confirmation this week that Pope Francis will attend the World Meeting of Families in Dublin next August is welcome news, in particular for the almost 4.5 million Catholics on the island.

While the drift away from the Catholic Church over the decades since Pope John Paul visited in 1979 is pronounced, as indeed is the case with the other churches in Ireland, it remains a fact that 78.3 per cent of people in the Republic identified themselves as Roman Catholic as recently as in the census of April 2016.

It showed, whether practising or otherwise, that the Catholic Church remains very much part of the DNA of a great majority of Irish people.

To many, through his words and deeds, he has become the personification of compassion, of mercy over judgment

Of course the numbers who turn out to see Pope Francis may not be on the scale of the 1979 papal visit, but that was a once off. That trip by Pope John Paul II was the first such visit by a pope to Ireland in history.

The likely success of Pope Francis’s visit to Dublin is greatly enhanced by the man himself. To many, through his words and deeds, he has become the personification of compassion, of mercy over judgment, at a time when such qualities are rarer among world leaders.

His natural and spontaneous warmth, added to an outgoing personality that revels in the company of others, makes him someone to whom people are drawn even when he stumbles. And stumble, on occasion, he has.

An example of this appeal from outside his own church was the response to confirmation of next August’s visit by the Presbyterian Church in Ireland.

The Clerk of its General Assembly and its general secretary, Rev Trevor Gribben, said that many others, of differing theological or even political views, wanted to join their Roman Catholic neighbours in welcoming the news.

Yet, for his visit to be complete, it is important that Pope Francis ask forgiveness of all Irish people on Irish soil for his church’s role, at local and Vatican level, in the cover-up of clerical child sexual abuse.

1 Boy’s treatment by school over alleged thefts was ‘unbelievable’, judge says
2 Pubs to stay closed until September at least as restrictions tightened significantly
3 Irish in Canary Islands: Life has changed dramatically
4 In Oz, Marianne would have told Connell: ‘Get stuffed, you gutless wonder’
5 ‘This was like a nuclear bomb’: More than 2,700 injured in Beirut explosion
Real news has value SUBSCRIBE