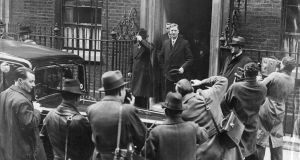 In 1923 and 1926 WT Cosgrave’s government had made agreements with the British government arising out of the Anglo-Irish Treaty of 1921 providing for the consequential distribution of financial liabilities between the two governments. These obliged the Irish government to pay over land annuities collected from former tenant farmers who had acquired ownership of their land under pre-independence land acts. The purchase of these farms from the landlords had been financed by the United Kingdom government.

In 1932 de Valera’s Fianna Fáil party came to power on a promise to withhold these annuities. When they moved to give effect to this promise the British government labelled de Valera a treaty-breaker and retaliated by imposing tariffs on Irish cattle exports to Britain. This precipitated an economic war between the two countries; the Irish slogan was “burn everything British except coal”.

De Valera’s justification was a cocktail of history, politics and law. Ireland had been over-taxed by hundreds of millions before independence. The agreements arose out of the Treaty which had, he said, been imposed by threats of war and could not be considered morally binding. The 1923 agreement, although given the force of law by legislation in that year, had never been published. The 1926 agreement had not been laid before the Oireachtas for its approval.

De Valera had a legal opinion signed by eminent barristers, most but not all of whom were political followers, stating that the agreements were not legally binding. He offered to have the matter arbitrated by an international tribunal but the British insisted it must be a commonwealth tribunal, as agreed at the Imperial Conference of 1930, so it came to nothing.

De Valera was not too pushed about cattle exports. Those who made money from them were his political opponents. The cos-mhuintir who supported him were glad that beef was cheaper. Re-kindling hostility to Britain suited his more nationalist political and economic agenda. The inflow of money for Hospital Sweepstakes tickets mitigated the damage to the balance of payments inflicted by reduced receipts from cattle exports.

Ultimately, in 1938, the dispute was settled by a once-off payment of £10 million to the British government, a good deal for the Irish as the annual payments were some three million. The same agreement secured the return of ports in Cork and Donegal still occupied by the Royal Navy. This made Irish neutrality in the Second World War possible.

A relic of the dispute is still to be found in the Constitution that de Valera had had enacted by referendum the previous year. While stating reverently that Ireland accepts the generally recognised principles of international law as its rule of conduct in relations with other states, the Constitution has safeguards regulating adherence by governments to international agreements.

Unless labelled technical and administrative, they must be laid before the Dáil. Where they impose a charge on public funds, as those about land annuities had done, they must also be approved by the Dáil. No similar restrictions limit the freedom of action of Her Majesty’s government.

1 Civil War rape which led to pregnancy recalled in new TV documentary
2 Martin ‘seriously concerned’ at Covid complacency amid pressure over church events
3 Dublin will need a rescue plan after these new Covid-19 restrictions
4 Mike Murphy: ‘I won’t do another over-70s lockdown’
5 Born to ride, born to win: Sam Bennett, the making of a green machine
Real news has value SUBSCRIBE