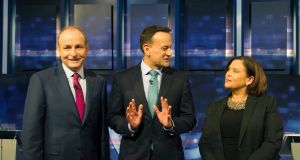 On all the big issues there’s not much between the parties. They are all pro-EU. Mary Lou McDonald has said a Border poll can wait. And all parties support the 12.5% tax rate. Photograph: Aidan Crawley/EPA

In keeping with the times, let’s quote Vladimir Lenin. The Communist leader, looking back on the October Revolution and seeing it in the context of what had gone before in Russia – from late 19th-century Tsarist reforms to the 1917 Bolshevik takeover – quipped “there are decades when nothing happens and then there are weeks when decades happen”.

Believers in the Leninist world view of big epochal moments might be tempted to conclude that Irish politics has just witnessed one. By this analysis, the previous status quo has been shattered, and a new paradigm is taking shape, whereby old people vote Fine Gael or Fianna Fáil, and young people vote Sinn Féin.

1 ‘I woke up the next day in a guy’s house covered in bruises’
2 Coronavirus: What we know so far about how Ireland is affected
3 Woman (38) appears in court charged with murder of Garreth Kelly
4 Coronavirus: Ireland plans for massive increase in tests
5 Sinn Féin’s problem with names much more than mere wordplay
6 What is coronavirus and what should I do if I have symptoms?
7 Dublin stabbing: Parking space was at centre of previous rows, gardaí told
8 Miriam Lord: Lady Lou crowned the People’s Taoiseach at Liberty Hall
9 Coronavirus: Ireland-Italy match is called off, IRFU confirms
10 Coronavirus: ‘All bets are off’, says aircraft industry chief
11 Woman convicted of disguising herself as grandmother to conceal murder
12 ‘Black Americans and Irish have a lot in common. I feel we’re connected’
13 State would need 16 fighter jets for full air defence capability, expert says
14 Couple challenge decision over access to Killarney lake
15 Soreness is good, scales are pointless: The 10 biggest myths in fitness
16 Gordon D’Arcy: Change has to happen before Ireland's trip to Paris
17 Supreme Court restores 10-year jail term for man who raped his wife
18 Duffy says she was ‘raped, drugged and held captive’
19 Róisín Ingle: How Taylor Swift helped me navigate the puzzle of parenthood
20 Coronavirus: Irish holding back on holiday plans
21 Could Ireland put towns under lockdown if coronavirus arrived?
22 Varadkar declines to negotiate with Fianna Fáil on forming government
23 Core blimey: How a 62-year-old man planked for eight hours
24 Excluding Sinn Féin from Government is hypocrisy and also bad politics
25 Ireland still facilitating multinational tax avoidance, commission says
26 Pine marten helping red squirrel population rebound, study shows
27 Johnnie Fox’s sees coronavirus cancellations
28 Head of State’s €1bn-a-year transport body to step down
29 Funeral of girl killed in Cork crash told her memory ‘will never die’
30 Wealthy investors’ legal challenge against Revenue fails
31 Gawping at other Irish people’s houses. It’s who we are
32 ‘Look sexy. Look hot. Don’t be so provocative. You’re asking for it’
33 Coronavirus: Second person (60) dies in France
34 Cosgrave Group in €210m deal to sell 368 Dún Laoghaire properties
35 Bird’s eye views from Dún Laoghaire duplex for €695k
36 Charity boss and relative lived in flat for senior citizens, council claims
37 Turbocharging housing supply may fuel negative equity
38 Even left-wing Democrats baulk at Europe’s idea of social democracy
39 Irish in Italy on coronavirus: ‘The city is in a bit of panic – the streets are empty’
40 Koepka takes opposite stance to McIlroy on proposed Premier Golf League
Real news has value SUBSCRIBE