David McWilliams: The programme for government will leave young people behind

Ireland is experiencing a generational divide both politically and economically 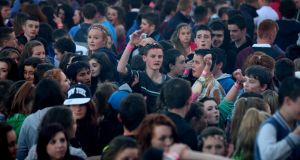 The young are being left behind on almost every economic metric, from wage rates, to job security to housing. These issues have been made more stark since Covid-19. Photograph: Brian Farrell

A gerontocracy is a country run by old people or people who are considerably older than the average. Traditional societies (and communist ones) were typically run by the elderly.

For Plato it was obvious that the old would run Athens as they would bring wisdom to decision-making. In contrast, the Roman republic usually vouched for younger men. Later Roman emperors tended to be young not least because being the boss was a dangerous job; many met with premature and nasty deaths.

1 Pubs to stay closed and restrictions to remain on all gatherings, Cabinet decides
2 ‘This was like a nuclear bomb’: More than 2,700 injured in Beirut explosion
3 Trump flounders in interview over Covid-19 cases and deaths
4 Hume brought to Derry as candles in windows light his way
5 Europe braces for Covid-19 wave as Spain records 8,500 new cases over weekend
6 Ireland needs to move to ‘zero-Covid’ policy to avoid catastrophe, scientists say
7 Covid-19: Even though now the trend is upward, it isn’t all bad news
8 When Covid subsided, Israel reopened its schools. It didn’t go well
9 Coronavirus experience shows how Greece’s weakness is its sunshine
10 Social worker overcomes poverty to graduate with master’s degree
11 Boy’s treatment by school over alleged thefts was ‘unbelievable’, judge says
12 Q&A: Pubs, travel and weddings – the Cabinet decisions
13 Novavax says Covid-19 vaccine induces immune response in small study
14 Just a quarter of recent Covid-19 cases occurred in Dublin, officials say
15 Stirling and Balbirnie tee off to tee up another famous Ireland win over England
16 Publicans warn they face ‘full-blown crisis’
17 Vicky Phelan: Postnatal depression made me hate being a mother
18 John Hume: ‘He was our own Martin Luther King’
19 Historians pay tribute: ‘Today we live in John Hume’s Ireland, and thank God for that’
20 Why are there so many angry dads?
21 Restrictions threaten 147 unbroken years of Irish athletics history
22 Is that concealer you’re wearing, Mr President? The rise of men’s makeup
23 Fintan O’Toole: Supreme Court calls time on government waffle
24 Five of the best foundations to try as the world comes back to life
25 24 hours in Bundoran: ‘The town is mental. No one expected it to be so busy’
26 Deluge of appeals expected after predicted grades handed out in Scotland
27 Portumna publican’s frustration at boiling point following Government decision
28 John Hume obituary: Nationalist leader who championed ‘agreed Ireland’
29 Holyhead on Brexit: ‘When will people wake the f**k up?’
30 David Trimble: After the big dinner in Oslo, somebody said why don’t we party together?
31 Labour Court rules Sisters of Charity must pay staff public service-scale redundancy
32 Solskjaer requires more than Sancho to mount a title tilt
33 Elderly parents living in property you own will save you on capital gains tax
34 DUP’s Brexit ads: Who bankrolled the secretive £435,000 campaign?
35 Cabinet decision on outdoor events driven by concerns about travel
36 How safe is it to go back to the office?
37 ‘I’ve had my butt kicked for the past three years’: Jamie Oliver on fame and failure
38 ‘A win like that is special and one we’ll remember forever’ - Ireland skipper Balbirnie
39 Not for the birds: Keep your blueberries for these delicious oat slices
40 Owner of Dundrum Town Centre to sell prized assets
Real news has value SUBSCRIBE