Covid vaccines: We may ‘follow the science’, but do we listen to what it says? 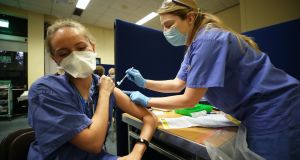 The Taoiseach tells us that mass vaccinations are being rolled out and that we will be in a “very different position” by the summer. That is the beginning of the end if the supplies arrive, the distribution works, the uptake is widespread and there are no unanticipated problems. We have reached mile 18 of the Covid-19 marathon. The worst is yet to come but the end is in sight.

And now we have a new variant of the virus. We did not anticipate that one. Modelling its spread in the UK suggests that it is more infectious. Will it be more lethal, will it be covered by existing vaccines, will there be more troublesome variants? Lots of speculation but, for now, we just do not know.

We have heard a great deal in Ireland, as elsewhere, about “following the science”, but exactly how much science is going into decision-making in Ireland and do we need it anyway?

The National Public Health Emergency Team (Nphet), mostly civil servants led admirably by Dr Tony Holohan, has two types of relevant expertise: in modelling of disease spread, informed by health statistics, and in public health. These have been integrated to provide advice about how and when to impose traditional restrictions to limit viral spread and protect the health services from being overwhelmed.

Churchill remarked that “scientists should be on tap, but not on top”. Nphet can advise, but the decision to act and the responsibility for the consequences of those actions is political. When there is an accounting for all this, the buck will stop there.

Getting to the heart of research on medicines, body clocks and ageing VIEW NOW

But do we have the tools to address the challenges ahead? Does advice from Nphet and from medical consultants sufficiently inform our political decisions?

The emergence of variants anteceded the one now prevalent in Britain and was entirely predictable. But to know that it exists one must be able to sequence the virus, and our capacity for sequencing is paltry. We are simply incapable of adequately monitoring the spread of this variant or detecting the emergence of others; to decide which are clinically important variants, and which are just typos in the viral code.

We have shown the ability to apply localised – and more general – lockdowns in response to outbreaks, pointing the way to development of an all-island strategy to contain outbreaks across the two jurisdictions. However, our approach to international travel and quarantine has never been serious. Furthermore, our capacity for tracking and tracing, which is critical to limiting localised outbreaks, is inadequate.

Development and consistent application of these approaches can indeed drastically reduce infection rates. We have only to look at how normal life has re-emerged in Australia, Taiwan, New Zealand and Iceland to know this. There is an urgency to this consideration as cases surge, predictably followed by hospitalisations and deaths. But there is an economic price, and the decision is political. For now, the politicians have decided to be only a little bit pregnant.

The breadth of scientific advice available to Government is another problem. The challenges we face are considerable. Will new variants be more lethal, will they be more likely to infect children? Will we differ in our response to vaccination? How long will immunity due to vaccination last, especially in the elderly? Will there be differences amongst vaccines in their effectiveness, in their safety, in their duration of effect? Can we predict, based on an individual’s genetics or their metabolic or immunological response to infection, how the disease will evolve?

We already know that genetic or immunological defects in the interferon pathway mark out individuals who develop severe disease. We also know that amongst patients in intensive care there are striking differences in their immune response to infection. Does this predict how they might respond differently to medicines or whether they will develop long-term consequences ?

To address these issues, we need advice from virologists, experts in human genetics, bioinformatics, experimental medicine and immunology. We also need an investigative and analytical infrastructure that is sorely lacking. This void reflects a long-standing neglect of science dating from the great recession that might have been understandable then. However, it is inexcusable now in the context of this pandemic and the need to prepare us for the pandemics to come.

I first wrote to this newspaper 30 years ago suggesting that we needed a minister for science – one person at the cabinet table whose only responsibility is science. Not “further and higher education, research, innovation and science”, just science. That person needs a chief scientific officer (CSO) for whom that is their only job, not as at present, one conflated with leadership of the funding body for science. Both the CSO and the chief medical officer (CMO), Dr Holohan, should have advisory councils and the two structures should allow for the flexible formation of working groups when challenges of a medical scientific nature emerge. Given our small population and scientific base, members of the councils should be selected solely based on internationally recognised expertise and drawn from within and outside the country.

Look no further than our nearest neighbour. The infrastructure in the UK to develop drugs and vaccines, the expertise in genetics and experimental medicine to detect and assess the implications of new strains of the virus, and the integrated advice from a CSO and a CMO have all been impressive. The mistakes have been mostly political. In Ireland, our problem is not that we do not follow the science; it is that we do not know what the science is saying.