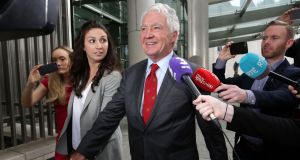 The collapse of the Seán FitzPatrick trial is a defining moment in the fallout from the banking collapse. Reading the details of what emerged in court, the public is surely left wondering what on earth was it all about.

The case concerned borrowings which FitzPatrick had made from Anglo Irish Bank, where he was chief executive and later chairman, and his alleged failure to disclose them to the bank’s auditors, EY, then known as Ernst & Young.

It was a serious issue which demanded a fair and thorough investigation and trial. Perhaps the jury would have agreed with FitzPatrick’s initial contention that there was nothing illegal about the way the loans were moved at year end to Irish Nationwide’s books. Or perhaps not. But they never got to decide due to a series of very unfortunate events.

The specific factors behind the collapse of the FitzPatrick trial are jaw-dropping. This was an omnishambles. The judge found that the investigation was “biased” and “partisan”. This was an extraordinary conclusion which begs the question of why the Office of the Director of Corporate Enforcement (ODCE) had acted in this way. Did the ODCE feel pressure to bring a case against the central figure in Anglo Irish Bank, which collapsed costing us all more than €30 billion? And if so, why?

Then there was all the detail that emerged during the week: the appointment of an inexperienced investigator, the failures in taking witness statements – notably from two EY partners – and the shredding of documents relevant to the trial.

Flaws in the process

And the questions go beyond the ODCE. The EY partners and their legal advisers, A&L Goodbody, surely should have spotted the flaws in the process used to take their statements. Taking such statements is one of the basics of Irish criminal procedure and Garda expertise available to the ODCE’s office should have been used. Also, what oversight was exercised by the Director of Public Prosecutions (DPP) on the investigations? And why did the DPP press ahead, even after the collapse of the first trial in 2015 signalled that there had been clear problems in the investigation?

The whole affair will add to public scepticism about how the fallout from the banking collapse has been handled. Three bankers – Willie McAteer, John Bowe and Denis Casey – went to jail for fraudulently moving funds between Anglo and Irish Life & Permanent to make Anglo’s books look better. Bowe and Casey have appealed. Ironically, their crime was in trying to cover over cracks in the financial system as the house of cards started to tumble.

There is no big gap in Irish law which allowed the banking crisis to happen. The Central Bank’s powers have since been beefed up, for sure, but even back when the bubble inflated it had the legal firepower to at least limit the damage. Also, as a 2016 report of the Law Reform Commission into regulation and corporate law pointed out, since 1992 it has been an offence for a bank or building society to fail to manage its business in accordance with sound administrative and accounting principles. The laws and regulatory powers were all there. The problem was that by the time anyone realised that the banks were in a mess it was way too late.

Just as “the system” failed to stop the crash, its response afterwards has been found wanting. A key mistake was made early on, I believe, by not applying to send a High Court Inspector into Anglo Irish Bank and Irish Nationwide. This would have at least provided some clarity on what happened.

Instead we have had an interminable legal process based on specific charges with decidedly mixed conclusions. In turn this has put other investigations on hold: for example, an inquiry by the Chartered Accountants Regulatory Board into specific issues relating to EY’s audit of Anglo has been on hold now for some years, on the request of the DPP who did not want it to affect other legal proceedings. And other inquiries into the crisis – such as the one undertaken by a special Oireachtas committee – have had to tip around issues which crossed over legal cases under way or planned.

Our legal process is slow at the best of times. But the huge legal teams employed on all sides have seemed to delay the cases relating to the banking collapse interminably. There is something, still, in the investigation and prosecution of alleged white collar crime which is not working. The Law Reform Commission suggested some ways to improve regulation and the legal structure. And the penalties for offending have been increased, notably in 2014 legislation.

But the key issues seem to lie in the investigation into allegations of white collar crime and – when evidence is gathered – the legal process used thereafter. There are endless hurdles, even before a jury gets to hear a case. Rightly or wrongly, this leaves the impression that alleged white collar offences are simply not treated the same as what might be called more traditional offences.

You will be prosecuted quickly enough if you rob a house or a car, or are dealing drugs. But white collar investigations take an age – and court processes get caught up in a miasma of argument about actions and their motivation and the right to a fair trial. When you add in a deeply flawed investigation – as in the FitzPatrick case – you end up with a sorry mess.