Oliver Callan: Varadkar’s next generation Fine Gael is the same as the old one

He is globalist, anti-abortion and fired a class missile with his anti-welfare fraud campaign 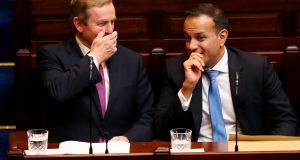 So much for the next generation of Fine Gael. Far from heralding a new era, Taoiseach Leo Varadkar is surrounded by almost all of Enda Kenny’s Cabinet and was elected with the help of disgraced TD Michael Lowry. Only a year ago, Varadkar said of Lowry “he has an issue with the law” and warned his party should not return to “parish pump deals”.

The Tipperary TD helped elect Kenny as Taoiseach last year and his constituency won extra health resources months later, despite denials of a deal. Varadkar’s rebound to the worst days of Fine Gael was followed by a Cabinet reshuffle as timid as Theresa May’s, returning every last one of Kenny’s ministers except for the retired Michael Noonan.

At least May had the decency to force out the two advisers behind her disastrous general election campaign. Heads roll in Britain, but only eyes roll in Ireland. Never mind that Varadkar was the head of communications for the “keep the recovery going” campaign.

Varadkar has good traits. What he lacks in charm he makes up for in intelligence. He’s a weak speaker but has no fear of debates. He did well as minister for transport and tourism. When Labour tánaiste Eamon Gilmore pathetically rolled over on the Garda whistleblower scandal, Varadkar reignited it by calling on the commissioner to withdraw the “disgusting” slur, causing Martin Callinan’s demise and a greater focus on the controversy.

He used his maiden speech as Taoiseach to express anger at being labelled an 80s-style Thatcherite. It doesn’t matter how much he wants to be seen as a Macron-esque centrist, his career to date has been sharply to the right. He is globalist, anti-abortion and fired a class missile with his anti-welfare fraud campaign while seeming unconcerned about the State’s failure to tackle white-collar crime, tax avoidance and defamation laws that protect the rich from scrutiny.

His Fine Gael election-winning speech that “prejudice has no hold in this Republic” rang hollow when you consider his anti-immigrant views in 2008. He suggested offering unemployed foreigners a lump sum payment of six months’ worth of benefits if they agreed to leave. Challenged on it recently he replied “that was a long time ago, I don’t remember that”.

The new Taoiseach’s communications skills have been exaggerated by a friendly press corps flattered by his tiresome courting. As minister for health, they garnished his image with a reputation for “straight talking”, even though he was just simply admitting how bad the crises were, as if it was nothing to do with him.

He shrewdly learned early on as a TD that the quality of Irish political discourse is so poor, one is guaranteed huge press if you sound half-sentient with a splash of colour. Thus he once likened coalition with Fianna Fáil to a gay marriage, he said “the gutter is Bertie Ahern’s natural habitat”, and told victims of austerity cuts “take a holiday, it won’t be all bad”.

Varadkar’s elevation made world headlines because of his foreign heritage and sexuality, neither of which are relevant to Irish voters. What they care about is whether his tenure truly represents a “new generation”. While he was declaring a recovery in last year’s election, 15-24 year-olds were still leaving the country in greater numbers than they were returning. The volume of young people emigrating, more than 30,000 a year, actually increased in 2016.

He should take note that Ireland still has the highest rate of youngsters on dole and disability benefits across 35 countries of the OECD, that youth voter turnout is significantly lower here than the EU average and that poverty rates are highest among young adults. Jeremy Corbyn’s bounce was down to the energising of the youth. If they were to mobilise in similar numbers here, who are they likely to see as the new hope? Taoiseach Leo, who, if an election were to be held next year would have been in government for seven long years?

There is one radical alternative to the politics that Varadkar represents. It’s a movement undergoing generational change who wouldn’t do business with the likes of Lowry. As with Corbyn, they are hated by the establishment media, a bonus for young voters. Perhaps the rise of Varadkar will reinvigorate a new generation after all. The problem for him is that the movement could well be Sinn Féin.