Cliff Taylor: The threat of no-deal Brexit must lead to action 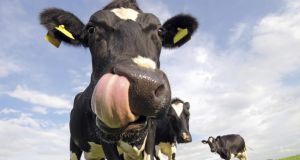 Beef and dairy products are left exposed by a potential no-deal Brexit – particularly some areas of the beef sector and cheddar cheese.

The deal reached before Christmas to allow the talks between Britain and the European Union to progress have led to speculation that we might be heading for a softer version of Brexit. And with former Ukip leader Nigel Farage this week saying he might favour a second referendum, the situation is clearly very fluid.

However, it is no contradiction to say it is also time to push on with preparations for a no-deal Brexit. Britain could still crash out in March 2019 with no deal done with the EU. As it could be well into this year before this is all clarified, we need to be as ready as we can be.

9 Miriam Lord: Back to school for foot-in-mouth specialist Josepha Madigan

12 ‘An inspiration’: Young poet Amanda Gorman and her words capture the moment at Biden inauguration

18 ‘I’m the meme queen’: A QAnon digital soldier marches on

20 ‘The hellhole says goodbye’: Glee and relief in Europe as Trump departs

23 ‘Brexodus’ of jobs from City of London to continue, says EU commissioner

25 The night-time noise in my house is giving me sleepless nights. What can I do?

26 The only four skincare products you need

27 Baked spuds get a tasty, crunchy filling and topping

29 Man who sexually assaulted woman on Luas tram is jailed

33 What can Ireland expect from Joe Biden?

34 Q&A: Can I still pass Covid on after I’ve been vaccinated?

35 Coronavirus: How can philosophy help us in this time of crisis?

39 What is Ireland’s plan for vaccinating people against Covid-19?