Cliff Taylor: No end in sight for fake news and post truth 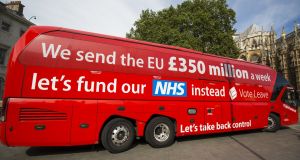 Post-truth drove into our lives in the shape of the Brexit bus and its claim that the UK could save £350 million a week through cutting contributions to the EU budget after Brexit. Photograph: Jack Taylor/Getty Images

Fake news, having made our acquaintance in 2016 with the election of President Trump, had another big year. The people in Collins dictionary named it “word of the year,” defining it as “false, often sensational, information disseminated under the guise of news reporting”.

Following up on Oxford Dictionary’s coronation of “post-truth” as the 2016 champion word, something big has been stirring in the world of news, how it is disseminated and how we consume and understand it. The most striking factor, surely, is the brazenness with which politicians and some businesses now trumpet the obviously false – and the inability of “ the facts” to quickly kill off the nonsense. A fractured and in some cases partisan media and the role of social media channels such as Facebook in disseminating “news” are also important.

Of course trying to confuse the public is nothing new. In an essay on The Problem with Facts earlier this year, UK economist Tim Harford wrote about how the big tobacco lobby conspired to obfuscate, distract and mislead in the decades after evidence first emerged in the 1950s of the link between tobacco and lung cancer. He writes about the importance today of fact-checkers and the media calling out lies, but also about how dull, boring, complicated truth can often fail to grab the public’s attention when pitted against the razzmatazz of a good “story” that latches on to the public mood.

This is a central part of the “post-truth” world, defined by the Oxford Dictionary as “circumstances in which objective facts are less influential in shaping public opinion than appeals to emotion and personal belief”. You can argue about the role of social and traditional media here, but clearly the influence of channels like Facebook, Twitter and Google is now enormous and their responsibility to police their content is still an issue of debate.

Post-truth drove into our lives in the shape of the Brexit bus and its claim that the UK could save £350 million a week through cutting contributions to the EU budget after Brexit. Countering the argument required a lot of dull stuff about how the EU budget is calculated, hard going even for nerds like myself. Not only did the endless talk about the claim seem to fix it in people’s minds, but it also distracted from any decent debate on what Brexit might actually mean.

And the £350 million lie pales into insignificance compared to what has happened since. A week or two on from the retreats it had to make to get through the first phase of the talks , the Conservatives are at it again.

The pretence that the UK can have a “bespoke” trade deal with the EU allowing access similar to what exists now and also a string of new trade deals on its own with other countries is a nonsense, even before you start counting in the complications of the Irish Border.

Again, counteracting this requires a lot of detail about the way the EU single market and customs union work, the complex trade rules overseen by the World Trade Organisations and other delights such as regulations on rules of origin and tariffs. This struggles to compete against the narrative of Britain “taking back” sovereignty, “controlling” its borders, and “striking out on its own” to trade across the world, never mind the return of what Theresa May called the “iconic” blue passport.

Does it matter that the facts sometimes catch up with the fake news? The UK will soon run into the reality of the trade talks. Folks with blue passports will often have longer to admire them as they wait in the non-EU line at airports. But right now the fake news keeps coming from Number 10.

Across the Atlantic, President Trump has hailed his new tax bill, passed by Congress this week, as “an incredible Christmas gift for hard-working Americans”. An analysis by the Congressional Budget Office (CBO) – the US’s independent budget watchdog – shows that the full impact of the tax measures and resulting spending changes will leave people earning up to $30,000 a year worse off, give a small lift of a bit over 1 per cent to those around $50,000 but deliver the biggest gains, of more than 3 per cent next year, to those earning more than $500,000. But the big group of middle-income earners will notice a few dollars more in their pay packets and few will bother to look through the CBO’s tables.

Nor are we immune in Ireland. Reports this week of the commission of investigation into the sale of Siteserv by the IBRC to a company owned by Denis O’Brien looking for more money for its lawyers and due now to report by the end of next year reminds me of the fiction peddled by the government when the inquiry was set up, that it would be done and dusted by the end of 2015. Everyone knew this timeline was impossible, but it was enough to damp down the controversy.

And in a more general way, politics here are being pushed into the kind of packaged,black and white debate which sees each move immediately judged on social media as a success or a failure, a triumph or a disgrace. This leads the truth to be bended and distorted.

Will the pendulum start to swing back? Big social media sites like Facebook, for example, are now employing fact-checkers and all are under pressure to deal with “fake news”. There are signs in the US of some more reliance on traditional media, with subscriptions soaring at the New York Times.

Maybe we are getting near “peak” post-truth. Thought I’m not so sure. Politics and big decisions still seems driven as much by emotion and the needs of the moment as by facts. Politicians – and some businesses – seem ever happier to boldly mangle and distort the truth. Social media channels often allow them to spread the message more easily. than previously.You keep expecting them to crash head first into reality,to get undermined as the media point out the reality, or to collapse among their own contradictions. Maybe in 2018 a few of them will.

1 Bus Éireann to shut many inter-city routes due to financial pressures
2 Graham Norton: ‘I wanted out, out, out of Ireland’
3 Donald Trump's taxes: US president paid $750 federal income tax the year he won the election
4 Coronavirus cases rise in most counties but rate of increase is slowing
5 Hello Eir, is anybody there? Four unhappy customers complain
Real news has value SUBSCRIBE