Something wicked is stirring once again in the North

Sectarian rhetoric and anti-immigrant sentiment are on the rise 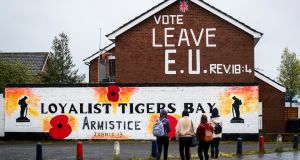 Loyalist Tigers Bay mural and Vote Leave EU with the biblical reference to Revelation 18:4 on the gable wall of a property in north Belfast, on Wednesday. Photograph: Liam McBurney/PA Wire

Westminster got a taste of Britishness Ballymena style last week with the skirl and thump of loyalist bands on Parliament Square.

There was also a retro turn from Ian Paisley jnr who leapt on to Leave EU’s equivalent of the back of a lorry to perform a sort of tribute act to his late father in the “never, never” days, before the old man accepted peace as the price of power.

Paisley jnr, who sees power as his birthright, is lately returned to parliament after being banished for serious misconduct in not declaring holidays paid for by the government of Sri Lanka*.

He strode about the platform with his arm thrust out, offering a story from “the Good Book” and a guarantee that the fight would be worth it: “ahead of us stands the sunny uplands of freedom!”

It was all jawdroppingly embarrassing. It was also irresponsible rabble rousing at a time when, as they say in the North, “the blood is up”.

The speech was pretty good as pastiche – as a child he must have heard so much of this stuff that he had the hang of some of the rhetorical flourishes his father used to deploy to such destructive effect . The backstop as the backstab was classic.

The shout of, “you are red, you are white, you are dynamite!” was shocking at first hearing.

It sounds like either a description of Sammy Wilson’s face, in terms that Paisley’s fellow DUP parliamentarian might well find flattering, or a direct appeal to violent racists. When you listen again, however, it turns out he is talking about an Ulster flag amid the sea of Union Jacks.

Red, yes, white, yes, but dynamite? As Tom Paulin noted in an essay on Paisley snr’s use of the same word, “puritan metaphor has a habit of becoming literal”.

One independent unionist councillor has put up posters that say, 'put veterans before immigrants' and 'local homes for local people'

(Paisley does not seem to mind that Rees-Mogg voted for Theresa May’s Brexit deal. A Tory toff is always good value at the top table.)

Some of the Scottish bandsmen carried US confederate flags.

British nationalists of the furious ilk addressed by Paisley last week dragged effigies of politicians through London with nooses around their necks. They threatened journalists.

MPs accused of being traitors have received death threats, and last week a neo-Nazi whose mindset resembled that of the man who shouted “Britain first” as he murdered Jo Cox was convicted of conspiring to murder another MP and a police officer.

Atavistic language is rife. One journalist was told that the mayor of London should be “hung drawn and quartered”.

The EDL has called for Muslims to be beheaded.

Back in the sunny uplands of Ulster the daffodils came early this year, and so did the bonfire builders. Here, we are used to living in the past. Paul Brady put it best in his song The Island, with its line about sacrificing the young “to feed the worn-out dreams of yesterday”.

Last week Belfast city council workers spent two days removing wooden pallets from Bloomfield Way, in the east of the city, where young loyalists had started piling them up in preparation for the big blaze on July 11th. This particular bonfire is notorious.

Last year when contractors removed it due to public safety fears they masked their faces because “sinister forces” were said to be involved.

In the same area last week I saw two murals facing each other across a redbrick side street.

One featured multicoloured greetings in many languages and the words peace and love in soft, friendly lettering. This area has a substantial minority population of people from other ethnic backgrounds now.

The other mural, in shades of black and grey, was more traditional – this had men with guns in paramilitary uniform glaring from behind balaclavas under the insignia of East Belfast UVF, which has lately been accused of murder and drug dealing.

They have also been involved in bullying new residents. Local elections are under way in the North and one independent unionist councillor has put up posters that say, “put veterans before immigrants” and “local homes for local people”.

In Coleraine, a group of men protested to the local council about the housing of Syrians in the area.

Another generation, instead of benefitting from peace, is being radicalised as if to prepare for conflict

A DUP politician has defended the erection of a banner beside Carrickfergus Castle that declares “Carrickfergus stands with Soldier F”, claiming that it is inoffensive.

The former paratrooper is facing trial for murder on Bloody Sunday in Derry in 1972 and other local politicians said the banner was hurtful to the families of the dead.

(Labour leader Jeremy Corbyn said he was shocked by the video circulated on social media apparently showing paratroopers in Afghanistan using an image of his face for target practise.)

Not far from Carrickfergus, the war memorial to those killed during the first and second World Wars has just been vandalised, presumably by those who might consider themselves republican, though given the flirtation between some unionists and neo-Nazis, we cannot be sure.

This has history – the fascist group Combat 18 used to be regular visitors at Drumcree, where the Orange Order said it was commemorating the Battle of the Somme.

Another generation, instead of benefitting from peace, is being radicalised as if to prepare for conflict.

We know where this goes, and it isn’t any place good. It certainly isn’t freedom.

1 Dublin stabbing: Parking space was at centre of previous rows, gardaí told
2 'I woke up the next day in a guy’s house covered in bruises’
3 Miriam Lord: Lady Lou crowned The People’s Taoiseach at Liberty Hall
4 Soreness is good, scales are pointless: The 10 biggest myths in fitness
5 Coronavirus: More matches will be cancelled if necessary, Ross says
Real news has value SUBSCRIBE