China must be held to account for brutal treatment of Uighurs 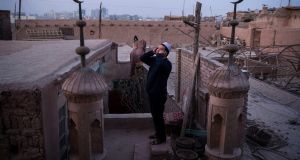 A muezzin sounds the call to prayer from the roof of a mosque in Kashgar in Xinjiang. A million ethnic Uighurs have been corralled into internment camps and prisons. Photograph: Adam Dean/New York Times

Today in China one out of every 10 Uighur people, a Muslim Turkic ethnic minority, have been imprisoned without trial. Well over a million people, who the Chinese government have decided are “not developed enough” economically or ideologically, have disappeared into a system of prison and forced labour camps, a system with chilling historical echoes.

At first, China’s rulers denied the existence of these camps until international scholars and journalists proved conclusively that they do exist. They did so through an analysis of Google Earth and other easily available satellite images which clearly show the construction of camps across the northwestern Xinjiang region where most of China’s 11 million Uighurs live. Other images show how mosques and important religious and cultural sites have been demolished in recent months.

Presented with proof, the Chinese government subsequently shifted position from denying the existence of the camps to stating that they are in fact “training centres” which have been established to help Uighurs learn vocational skills and improve their Mandarin Chinese language abilities. Historically Xinjiang has been one of China’s poorest regions, but is rich in oil and gas and today forms a central part of China’s multi-trillion-dollar Belt and Road foreign investment programme.

After being forced to admit the camps exist, Chinese officials invited international journalists on carefully controlled tours of “model camps”. Journalists reported bizarre scenes of inmates singing English songs such as If You are Happy and You Know It, Clap Your Hands and praising the camps for curing them of their “wrong thinking”.

Journalists were not shown the orphanages where the children of those imprisoned are now being held or the increasingly empty towns and villages where those inmates once lived, but they found them anyway.

It was through the accounts from the family members of those who have been imprisoned and testimony from those who have escaped the region that we are able to gain an insight into what is really going on in the camps. The picture is confirmed by the China Papers reported on in the The Irish Times and other media outlets today.

The China Papers documents combined with earlier testimony paints a picture of involuntary detention, brutality and ideological brainwashing in squalid, overcrowded camps. Credible reports are now emerging of detainees dying in these camps. In October Radio Free Asia quoted a Xinjiang policeman saying 150 people had died in camps in his region alone.

The entire province increasingly resembles a prison. CCTV monitors every street and house; all Uighurs have had to give DNA samples to the authorities and hand in their passports to police “for safe keeping”. Officials have been told to watch out for such “extremist behaviour” such as not watching television or not smoking cigarettes. Facial recognition software scans can identify anyone walking down the street.

One million Chinese officials have been sent from other regions of China to live with Uighur families as part of a “home stay” programme which aims to teach families about the benefits the Chinese government has brought them while also watching for “undesirable behaviour”.

Earlier this month, the New York Times published secret internal Chinese government documents which outlined how Uighurs had been “infected” by the “virus” of Islamic radicalism and must be quarantined and cured. Along with this was a private speech from President Xi Jinping in which he demanded “absolutely no mercy” be shown in the region.

I have been travelling to Xinjiang for 16 years, and lived there for a number of years in the mid-2000s. Since late 2017, the friends who have so enriched my life, who have taught me so much, who have shown me such kindness and warmth and fun, have disappeared one by one into this appalling system.

The Government was one of 22 signatories of a recent letter to the UN’s Human Rights Council calling on China to end its internment campaign in Xinjiang. It is right that our government has spoken out about this, especially when compared to the actions of another group of 37 nations including Saudi Arabia, Pakistan, Oman, Kuwait, Qatar, the United Arab Emirates, Bahrain, Russia and the Philippines who responded to this letter by saying they support China’s prison camps.

Leading Muslim nations are helping the Chinese cover up what is being done in Xinjiang in return for billions of dollars of investment. This is a deeply uncomfortable truth for the world’s Islamic community or Ummah. It is almost beyond belief that one country can imprison one million Uighurs because of their religion and the Muslim world remains silent.

The Government must do more: we cannot continue normal economic and diplomatic relations with a state that is capable of this. We Irish are acutely aware how such policies of internment play into the hands of those who actively promote violence and destruction. And also how, once inculcated, this fear and hatred can last for generations with such devastating consequences.

For now, the Chinese government is adamant that its system of internment is working and that Xinjiang is safe and stable. Will it now release the million people it has brutalised, confident that they will take up manufacturing jobs in factories, renounce their religion and speak the language of their jailers? Will millions of people forget their experiences in prison camps, and become loyal workers in the Orwellian society the Chinese Communist Party has created in Xinjiang?

We cannot abdicate our moral duty to speak out simply for fear of upsetting the Chinese and suffering economic pushback. History will judge us so very harshly if we do.