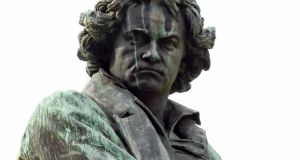 Statue of Beethoven in Vienna. Although his Irish airs had their admirers, they were not a success in his lifetime, or in much of the time since.

It is one of Beethoven’s lesser claims to greatness that, alongside his symphonies, concertos, and sonatas, he also composed settings for old Irish airs; a whole clatter of them, as we say in these parts, or 72 if you’re counting.

Alas, although they had their admirers, they were not a success in his lifetime, or in much of the time since. And part of the blame for that must go to man who made his fortune from the same genre, Thomas Moore.

Beethoven’s commissioner for the Irish songs was a Scotsman named George Thomson (1757–1851), whose ambition it was to have the folk music of these islands ennobled by some of the leading classical composers of the day, including also Haydn.

He had already done this with Scottish and Welsh airs, using lyrics from the poems of Robert Burns, Walter Scott, and others. And it was at Burns’s prompting that he then extended the project to Ireland, which in time accounted for the largest number of songs.

But first Burns died and after that the man Thomson hoped might write his Irish verses, Moore, decided to go solo with the art form. So not only was Thomson left to depend on lesser lyricists, he also had to avoid using the melodies that Moore went on to make famous.

The Bard of Erin had a stolen a march on him, he lamented.

Although Beethoven did his best with what was presented, using as one impressed critic put it, the “sophisticated artlessness that no ordinary composer could achieve”, he could not quite rise above the lyrics.

A less admiring commentator damned those as “an obedient supply of Hibernian absurdities”.

To which it should be added that one of the chief suppliers was an Englishman, William Smyth, a Cambridge professor of history who also wrote poetry on the side.

The mediocrity of the texts apart, Beethoven complained that Thomson often gave him melodies without the words or divorced from any original context, making it hard for him to get their sense.

And according to a documentary to be broadcast on the Scottish TV next week, there may have been deliberate censorship involved in this. Some of the old Gaelic airs commemorated, for example, the Jacobite rebellion of 1745, whose defeat was still colouring the politics of Britain and Ireland 60 years later.

Thomson may have wished to sanitise such material for “an upper-class lowland audience”, the documentary will hear. Such tidying up of inconvenient sentiment may explain the evolution of a song called Sileas na Ceapaich, a Jacobite lament which became a love song entitled Erin O Erin in Beethoven’s series.

Thomson in his turn complained that some of Beethoven’s settings were too challenging for the players who would be performing them. The great German was not for dumbing down, however, as he made clear in a letter.

“I am not accustomed to retouching my compositions,” he wrote. “I have never done so, certain of the truth that any partial change alters the character of the composition. I am sorry that you are the loser, but you cannot blame me, since it was up to you to make me better acquainted with the taste of your country and the little facility of your performers.”

More happily for the great German, there were those in this country who refused to give up on his Irish efforts, although the songs continued to languish in obscurity for 100 years after this death.

In 1927, the music historian William Henry Grattan Flood appealed for a revival: “In this centenary year of Beethoven, it ought not to be an unprofitable commercial venture for some English publisher to risk a republication [of his] Irish melodies, and so far as possible to substitute Moore’s lyrics.”

This didn’t happen then. But among Beethoven’s local champions was a man named Tomás Ó Súilleabháin, who became determined to rescue the songs’ reputation by replacing the original lyrics with better ones by Moore, Burns, and others.

It helped that, as Beethoven scholar Barry Cooper has noted, the great man had designed most of his settings so that “almost any text with the right metre and character” could slot in for the originals.

Ó Súilleabháin was helped in later years by his daughter Margaret. And although he died in 2012, aged 92, his mission was vindicated soon afterwards when the Dublin Institute of Technology Music Conservatory recorded the new, improved series – all 72 parts of it, on four CDs – as “Beethoven’s Irish Songs Revisited”.