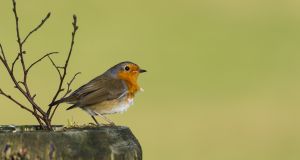 “There is something delightful about them, something clever in their gaze.” John F Scott: iStock

Its round, black eyes watched us and we froze. It had perched on the push bar of the lawnmower. Its black feet encircled the green metal, its head tilted to one side.

We were in our back garden, enjoying the gentle warmth that May sunshine brings. I was painting garden furniture and my husband was cutting grass. He had stopped trimming to empty the grass box, and when he turned back to the lawnmower it was occupied.

We stood for a few moments and admired the robin, the red feathers of its chest, its stillness, its calm bravery.

I closed my eyes and thought of my father, only a few weeks dead, and I blessed the bird.

Logic tells us that robins, like many birds in our gardens, are bound to occasionally hop at our feet, or stray inside our backdoors. And why would they not perch on a lawnmower as on a branch? Doesn’t that machine throw up some tasty titbits in its wake?

There are places in us that logic does not reach and I know I am not alone in being soothed by the sight of a robin.

There is a deep connection between people and that little bird. We tell ourselves winter’s tales of how the robin got its red breast.

And in Irish folklore, to kill a robin was bad luck that would result in a permanent tremor in the offender’s hand.

In some parts of the country, if the spideog entered a house, it signalled the death of someone in the family. The birds were accepted as messengers for those in the spirit world.

Many people still believe that.

Elma Walsh, mother of Kerry teenager Donal Walsh, who died of cancer in May 2013, spoke on RTÉ Radio recently about a “messenger” from her son, who visited a couple of months after his death. The 16-year-old came to prominence when he spoke publicly about facing his own mortality, the value of life and the futility of suicide.

Elma told presenter Brendan O’Connor that, on the morning of her 50th birthday, before going hill-walking with friends, she was at home. As she made her way into the hall, to go upstairs and prepare to leave, she noticed a fluttering in the sitting room.

She went into the room and found a robin.

The doors and windows of the house were closed, she said, and the robin was quite calm.

The next thing was he went and sat on Donal’s chair. And the reason I know that Donal sent him is because he shat on the chair. Donal always left me a job to do.”

She laughed with O’Connor when he asked about the “messenger” and said “not that you’d believe it”.

But there are plenty who do. Even in this age, of all-knowing science, there are things that cannot be explained. I have heard people swear that a robin entered their home just before the death of a loved one. I know of a truck driver who was joined in his cab by the bird, moments before the phone rang to tell him of the death of a much-loved relative. I have heard of a mother who found solace in the presence of a robin at her child’s grave.

It is easy to understand why stories would attach to robins; there is something delightful about them, something clever in their gaze.

They are not as timid as other feathered creatures and are prepared to be restful in our presence.

According to BirdWatch Ireland, they are one of the country’s most widespread garden birds. Their diet consists of insects and fruit and they happily feed at our bird tables. Their song is “somewhat melancholy”, the organisation says, they can be “very confiding”, and “often perch motionless close to gardening activity”.

So there it is, we spotted our robin doing just that, perching close to us while we gardened, doing what robins naturally do. The bird was no messenger from the spirit world, bringing tidings about the wellbeing of the recently passed. And our desire for more meaning in the visit was simply a projection of our own needs.

On the same day that we had our garden visitor, my brother mowed the grass at the back of our father’s house. When he stopped to empty the grass box, a robin landed on the push bar of his mower. He stood still, and watched it and thought of the man whose garden he was tending.

When a loved one dies, we struggle to understand the world without that person in it.

We try to find ways to stay connected to the one that we have lost.

We look at photographs, we listen to music, we tell each other stories.

Grief, like a tide, ebbs and flows, and we take comfort wherever we can find it.

I am grateful for the comfort of robins.