Tim Kaine talked about the how the Irish had suffered in America; but this needs to be put up against what the Irish inflicted 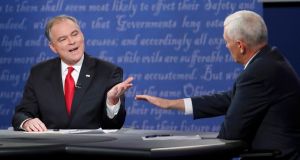 The US Vice Presidential debate on Monday night featured two men of Irish heritage. Dipping into the Passion Play version of the persecution of the Irish abroad, Democrat Tim Kaine invoked the historical discrimination towards the Irish in the U.S. to highlight the Republican Mike Pence’s support for Donald Trump’s inflammatory views on immigrants

It’s a convenient comfort blanket we’ve got good use out of over the centuries: the Irish treated as drink-sodden, poorly educated and genetically inferior. We only have to look at how Punch magazine portrayed the Irish: “a creature manifestly between the Gorilla and the Negro”.

This and other acts of virulent prejudice and have granted us a much-prized downtrodden, oppressed status and facilitated the ease with which in more recent history we could, with a straight face, align ourselves in solidarity with the Palestinians and the ANC.

Tim Kaine pointed to one facet of the Irish experience in America. But there is another: the Irish in America were inglorious bastards.

“Niggers out of Boston, Brits out of Belfast”. These words were chanted by the Irish in Boston during that city’s disgraceful busing desegregation debacle of the 1970s and 80s.

When the racial segregation of public schools was made illegal in Massachusetts in 1965, black children were bused to schools in different parts of the city. The Boston Irish were prime movers in an anti-desegregation movement, some supporters of which chanted “Niggers Out”.

When the Irish arrived in America, they exchanged their “oppressed” status for that of oppressor. They were particularly enthusiastic in racist violence against black people as there was direct social class competition between the two groupings.

“It is a curious fact” wrote John Finch, while travelling through the United States in 1843, “that the class of Irish immigrants in America are greater enemies to the negro population and greater advocates for the continuance of negro slavery than any portion of the population in the free States”.

The Irish in America were prize-winning racist thugs. In Chicago in 1864, 400 hundred Irish dockworkers violently attacked 12 black men who were looking for work at the dockyard.

The Chicago Tribune, reporting on the story, had it that anti-black violence was the exclusive domain of the Irish: “The Germans never mob colored men from working for whoever may employ them. The English, the Scotch, the French, the Scandinavians, never molest peaceable black people. Americans never think of doing such a thing. No other nationality consider themselves “degraded” by seeing blacks earning their own living by labor”.

Whenever the Irish are involved in a fight, the one thing you’re certain of is hearing a ballad being sung about it for centuries afterwards. But there aren’t any ballads commemorating the unprovoked mob attack on black people in Lombard Street, no lament about the Irish burning orphanages and lynching black men in New York.

It was this vile aspect of the Irish character that drove the Great Emancipator, Daniel O’Connell to tears of rage. He wrote of Lombard Street and the New York riots: “It was not in Ireland you learnt this cruelty”, adding that those Irish who supported slavery in America should no longer be recognised as Irish and “the passage to the United States seems to produce the same effect upon the exile of Erin as the eating of the forbidden fruit did upon Adam and Eve. In the morning, they were pure, loving and innocent; in the evening, guilty”.

When he visited Dublin in 2011, Barack Obama made mention of a man called Frederick Douglas and his great friendship with Daniel O’Connell. Douglas was an escaped slave from Maryland who went on to become a prominent anti-slavery campaigner.

During his time in Ireland in the 1840s, Douglas was overwhelmed by how he was treated. “In the soft fog of the Emerald Isle, I gaze around in vain for one who will question my equal humanity, claim me as a slave or offer me as an insult. When I reach the hotel, I enter by the same door as white people, I dine at the same table. I find myself treated with kindness and deference. When I go to church, I am met by no scornful lip to tell me “we don’t allow niggers in here”.

On his return to the U.S Douglas continued with his civil rights campaign. His staunchest opponents? The Irish in America.

Speaking in Brooklyn on his return he said: “I am told that the Irish element in this country is exceedingly strong and will never allow coloured men to stand upon an equal political footing with white men. I am pointed to the terrible outrages committed by Irishmen upon negroes. The mobs at Detroit, Chicago, Cincinnati, and New York are cited as proving the unconquerable aversion of the Irish toward the coloured race”.

It’s remarkable how we can in our more ridiculous moments identify as “the blacks of Europe” and yet we were lynching black people in New York even before the Ku Klux Klan came into existence.

Tim Kaine talked about the how the Irish had suffered in America; but this needs to be put up against what the Irish inflicted.

Kaine brought up the subject of discrimination towards the Irish in the US to wonder why his fellow Irish-American Mike Pence could agree with Donald Trump’s plans for Mexican and Muslims..

What Donald Trump has in mind for immigrants is positively humanitarian compared to the “discrimination” meted out by the Irish in America.