Parliament is prorogued; what happens now? 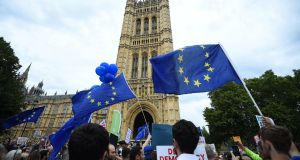 Protesters outside the Houses of Parliament, London, to demonstrate against prime minister Boris Johnson temporarily closing down the Commons from the second week of September until October 14th, when there will be a queen’s speech to open a new session of parliament. Photograph: Kirsty O’Connor/PA Wire

Queen Elizabeth has consented to proroguing the British parliament from September 9th until October 14th at the request of her prime minister, Boris Johnson.

The House of Commons is elected for a period of five years, but this is divided into sessions that normally last for between one and two years. Prorogation of parliament is a procedure under which the prime minister advises the queen to end the current parliamentary session and to set a date for the beginning of a new one.

During this gap between the end of one session and the beginning of another, parliament is considered to be “prorogued” and does not sit.

In recent times, the period of prorogation has typically been for about a week. Johnson’s move to suspend parliament for five weeks is very much out of line with the practice of recent decades.

Why has Johnson done this? The main advantage for him is that it drastically reduces the time available for MPs opposed to a no-deal Brexit to pass legislation forcing the government to request an extension of article 50.

This is significant, because in recent days, opposition parties had agreed that this was their preferred option to prevent no deal. The other option, a vote of no-confidence, is much more difficult. It involves Tory rebels engaging in the psychologically more difficult process of voting no confidence in a conservative prime minister.

More importantly, if the opposition cannot coalesce around a replacement prime minster within 14 days of a no-confidence vote, an election will follow and, as sitting PM, Johnson is entitled to set the election date for after Brexit, due to take place on October 31st.

Therefore, by proroguing parliament, Johnson has made it much more difficult for the opposition to use their most promising tool for preventing him from leaving the EU without a deal on October 31st.

This move has been greeted with fury. Even the speaker of the House of Commons has characterised it as a “constitutional outrage”. However, there is little that opponents can do.

So where does this leave us? Parliament will return on September 3rd. Opponents of no deal will have only a couple of days to seek to pass legislation ordering the government to request an extension of article 50. This is an almost impossible task, so they may instead move to trigger an immediate vote of no confidence.

The outrage at the prorogation of parliament means it is more likely that Tory rebels will support a no-confidence vote.

If the vote passes, this triggers a 14-day period during which an alternative prime minister can be appointed if it is shown that she or he commands the support of a majority in the House of Commons.

This has never been done before, so there are no clear precedents. However, even if the prorogation has kicked in and parliament is no longer sitting, it could be possible for this support to be indicated informally by means such as MPs signing a letter indicating support for a particular candidate.

If Johnson refused to resign despite majority support for someone else, a constitutional crisis would ensue. Again there are no clear precedents, but it is possible that the queen, acting on the advice of civil servants, would have to fire him and call on the person who has the support of a majority of MPs to form a government. This government could then request an extension of article 50 and call an election.

However, it is not certain that opposition MPs will be able to coalesce around an alternative PM. Tory rebels, Liberals and independent MPs all object to electing Labour leader Jeremy Corbyn, while senior Labour figures reject the idea of supporting anyone other than Corbyn as acting prime minister.

If no alternative prime minister emerges within 14 days, then an election is called. The law sets down a minimum of 25 working days for an election campaign, so there would be just enough time to have an election before October 31st if that is Johnson’s choice – but he could equally go for a polling day in early November when Brexit is already due to have taken place.

With the opposition vote currently split evenly between Labour and the Liberal Democrats, if the Conservatives can win back most Brexit Party voters they could win an overall majority under the UK’s first-past-the-post electoral system – despite having well under 50 per cent support for a no-deal Brexit.

Johnson could have tried to prorogue parliament immediately rather than waiting until September 9th. He has thus given the opposition the chance to topple him using a vote of no confidence. This suggests he may be keen on a “People v Parliament” election in which he portrays himself as the champion of the referendum majority whose decision is being thwarted by a remainer parliament.

Either way, the Brexit process has, yet again, seen a dramatic raising of the stakes and a further straining of the UK’s creaking uncodified constitution.