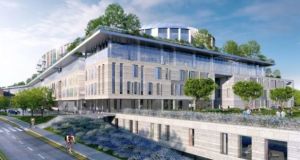 An artist’s impression of the proposed new national children’s hospital at the St James’s Hospital campus.

The recent focus on the building costs of the new national children’s hospital is understandable. However, an even more important concern is the risk that the new hospital will be so expensive to run that it undermines the Government’s broader vision of greatly improved healthcare services for children, of which the children’s hospital is only one component, albeit a critical one.

When the Health Service Executive initiated this project in 2005 the vision was not just for a hospital but the development of a new national children’s healthcare service. This is similar to the approach adopted for the cancer control programme and several other clinical programmes which were initiated at that time.

The new hospital is the anchor for this programme. It will link children’s healthcare facilities across Ireland including primary care services using new models of care with standardised care pathways for children. These new models of care rely on state-of-the-art information technology systems including digital records. With these new models of care and the associated IT support in place children from all parts of Ireland will be much less likely to require admission to hospital or to have to travel to Dublin for assessments.

In this context there has been comment on the fact that Ireland, one of the smaller countries in the world, is building one of the world’s largest children’s hospitals with 473 beds. While the new hospital is urgently needed we owe it to sick children, who in the modern era can receive a large amount of even complex care without requiring admission, to clarify the reasons behind this anomaly.

The McKinsey report from 2006 on establishing a new children’s hospital recommended 380 beds based on projected demographic changes and improved models of care. Since then experience in other countries has confirmed that implementing modern models of care with appropriate IT support results in a marked reduction in the amount of time sick children have to spend in hospital. This is happening today in places such as Cincinnati, Melbourne, Toronto and Liverpool, which are noted centres of excellence in paediatric care. In contrast, children in Ireland now spend much longer in hospital with the same conditions as children in these centres.

The HSE, the new children’s hospital operational and development boards and the faculty of paediatrics of the Royal College of Physicians have developed similar models of care for treating children in Ireland and are establishing an advanced IT system that will link the new hospital with children’s services across Ireland.

Their efforts should ensure that the new hospital will operate as effectively as hospitals elsewhere and, as a result, a child will be admitted only when there is no choice. An Irish child with diabetes or cystic fibrosis or Crohn’s disease should not in future have to spend any longer in hospital than a similar child in Boston, London or Melbourne. To accept otherwise is unfair to sick children across Ireland.

It is therefore essential that we now benchmark our requirement for a hospital of the size and scope planned against countries that already operate the more effective systems that we are now investing in and planning to implement. This comparative evaluation of infrastructure requirements is not difficult but must calculate our needs based on best practice internationally and not based on historic Irish activity data.

A benchmarking exercise such as this offers benefits to parents and children; to hospitals; to the Government, the Department of Health and the HSE; and to taxpayers.

Parents can be reassured that their child will be admitted to hospital only when absolutely necessary and children will know the time they spend in hospital will be as short as possible.

Hospitals are extremely expensive to run and the larger the hospital the greater the drain will be on the national child healthcare budget. The magnitude of the day-to-day running cost of the hospital will have a much greater impact on the board’s capacity to improve and sustain health services for children than the once-off building cost. Using international benchmarking to ensure we are maximising the effectiveness of the hospital will help the board protect the funding they require to operate services within the hospital and in centres all over Ireland.

It is prudent for funding agencies to assess the likelihood of redundant capacity in light of the new care pathways and advanced IT systems in the hospital.

The people of Ireland who are funding this new healthcare system for children can be reassured that their money is being spent in a manner that is supported by benchmarked evidence.

Our pride in the new hospital, which is at the heart of our new national healthcare service for children, should not be based on its size but rather on it delivering the best possible care for children. Optimal care should, as in other countries, reduce the need for children to be admitted to hospital. This is everybody’s wish and it is achievable if we fully exploit the benefits of the new care pathways and modern technologies that are planned. Ironically, success in implementing the planned state-of-the-art children’s health service will result in a new hospital that requires significantly less capacity than is currently planned.

Brendan Drumm is a paediatrician and professor of paediatrics at UCD. He was the first chief executive of the HSE, he has been an invited reviewer of healthcare systems internationally and is a reviewer on health service processes for the EU Horizon 2020 programme and the Canadian Institutes of Health Research. He is non-executive chairman of Glencar Healthcare

1 Paraic O’Donnell: MS is meticulously destroying me. I am being unmade
2 Rape victim verbally abused in courtroom after two men are jailed
3 Griveaux sex scandal threatens to reshape France’s relationship with Russia
4 ‘My new greatest fear – losing my child – colours everything in the day’
5 Former UUP leader: Unionism must realise it is no longer a majority in Northern Ireland
Real news has value SUBSCRIBE