Pat Leahy: No harm to put all this Covid pessimism into context 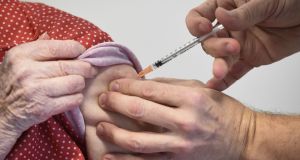 A resident of a retirement home n Loos, in northern France, receives a dose of the Pfizer/BioNtech COVID-19 vaccine. Photograph: Francois Lo Presti/AFP via Getty Images

New year, new beginnings. People will be understandably keen to leave behind 2020 which was, for so many people, a dreadful, difficult year. But 2020 also brought three developments which were overwhelmingly positive. And while the country and the world face difficult times in the coming weeks, it’s no harm to put the pessimism in context and appreciate these.

First, the awful pandemic has given rise to some extraordinarily positive developments. I know, I know, it doesn’t feel like that, but bear with me.

For a start, the scientific response has been astonishingly fast and effective. Vaccines normally take many years to develop. Last spring we were told we might have to live with the virus for several years. Instead, the various coronavirus vaccines were researched, developed, tested and manufactured in a few months. This represents an extraordinary achievement by the people involved, and also shows the fruits of academic, scientific and commercial collaboration. The roll-out of the vaccine presents a logistical challenge but it seems that not much more than a year after it appeared, the disease will be defeated. That’s amazing.

All countries absorbed a massive economic hit and huge personal cost to their citizens in order to protect the weakest. That was an act of significant altruism

The response from governments also told us something important about our societies. In most countries – and certainly in this one – the government, with broad public support, more or less completely shut down the economy and society to protect the most vulnerable: the elderly, those with underlying medical conditions, people who are obese, and people who for whatever reason were more susceptible to becoming seriously ill with the coronavirus. We are now entering another such period. From early on it was clear that the illness was – in the vast majority of cases – not dangerous to most people. But all countries absorbed a massive economic hit and huge personal cost to their citizens in order to protect the weakest. That was an act of significant altruism.

Countries, including our own, were able to afford to do this because central banks agreed to underwrite the public borrowing necessary to sustain their societies when economic activity was frozen. Governments were empowered and willing to borrow that money and spend it in a massive expansion of state supports. That shows both have learned at least some lessons from the last financial crisis. Progress, surely.

The second reason for optimism is that Donald Trump was defeated – comprehensively – at the ballot box. His destructive and dangerous leadership of the world’s most powerful country for the last four years has undermined the whole system of international co-operation, damaged multilateral institutions such as the World Trade Organisation and the World Health Organisation and sent out the message across the world that might makes right, and that economically and militarily powerful countries can do pretty much what they like. At home, Trump was socially regressive, environmentally damaging and politically divisive. He led his country in a way that damaged it at home and diminished it abroad. At he was utterly hopeless at actually governing, as the disastrous and mendacious management of the pandemic – which latest estimates suggest could kill half a million Americans – shows. For the purposes of contrast, during the second World War there was a bit over 400,000 US deaths. It is a failure on an epic scale.

So it is a cause for celebration that Trump was sacked by the voters. Because this wasn’t just the rejection of a bad leader; it shows that the toxic brand of politics practised by him during the campaign and over the last four years is not irresistible; people saw through him, but they also saw through the politics of fear, hate, division, cynicism and corruption. Joe Biden might not turn out to be the most dynamic president the US ever has. But he fought a campaign on the politics of unity not division, hope not fear, optimism not pessimism.

It is also worth noting that American institutions withstood the fierce assault from Trump and did their jobs. Congress limited his power; the civil service frustrated him; the military restrained him; the media interrogated him; and ultimately, even the judges he had appointed to the country’s courts refused to do his bidding. And the voters sacked him. The system may have wobbled, but it worked.

Finally, reasons for optimism at home. Just before Christmas, Ireland was ranked as the second-best country in the world to live in by the UN Human Development Index. The result got little enough coverage.

There are some who subscribe to the idea that Ireland is a failed state. I think that’s nonsense. So does the UN

My suspicion that that few Irish people believe it is true. And the UN criteria are pretty narrow, measuring health, wealth and education, all benchmarks by which Ireland does well compared with other countries. The UN doesn’t measure lots of things that Irish people find frustrating about their own country. They’ll mention housing, public services and bunch of other things that are demonstrably inferior here than elsewhere, especially in the long-established social democracies of the European Union.

But it does serve the useful function of reminding us that health, wealth and education are pretty important, all the same.

I don’t think there’s any danger of complacency about our stellar rating. There is, however, a danger that people believe in gloomier version of their country that the one they actually live in. There are some who subscribe to the idea that Ireland is a failed state. I think that’s nonsense. So does the UN. So do Ireland’s peers. And so do the billions of people who do not have the good fortune to be born in a country that enjoys not just health, wealth and education, but democracy, the rule of law, a free press, independent courts, the opportunity to sack the government every few years and the right to say things in public such as “the country is a failed state”. When we think our country is uniquely badly governed, we should bear these things in mind.