Berlioz’s Siege of Ennis – Frank McNally on the French composer’s love of Ireland, Robert Emmet, and a Shakespearean actress from Clare 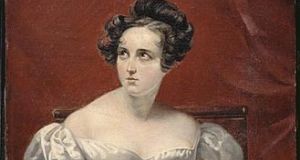 Portrait of the Irish actress Harriet Smithson by Claude-Marie Dubufe

One of the more exotic theories you’ll ever read about the composer Hector Berlioz, who died 150 years ago, is that he was the reincarnation of Robert Emmet.

The crucial date in this context was the Frenchman’s birth in December 1803, three months after Emmet’s execution. But for connoisseurs of coincidence, there are other supportive details, including mutual friends in France, both men having fathers who were doctors, and both fathers submitting medical theses to Montpellier University.

Even if you don’t believe in metempsychosis (transmigration of souls), however – we’ll come back to that briefly later – it is beyond dispute that Emmet’s spectre loomed large in the lives of Berlioz and many artists of the Romantic era.

This was partly the influence of Thomas Moore, one of the superstars of the period. But Moore aside, the martyrdom of Emmet and, before him, the 1798 leaders, had earned them a special place in the imaginations of early 19th-century European radicals like Berlioz.

This may or may not explain why, aged 23, the composer fell madly in love with an Irish actress, Harriet Smithson, from Ennis, after he saw her play Ophelia in Paris. That “madly” is more than just the usual cliché here. A biographer has described his subsequent state of mind as “emotional derangement”.

On the other hand, he did at least recognise that he was in love not so much with a woman, as with the idea of a woman, dramatised by the “supreme art” of Shakespeare. Either way, some of his early courtship was what we would now call stalking.

He wrote her many letters, none replied to, and for a time acquired an apartment near hers so that he could watch her come and go.

The infatuation was bitterly unrequited for a time. And it is to this that music lovers owe one of the most famous pieces Berlioz wrote, the Symphonie Fantastique (1830), a classic of its age.

While inspired by Smithson, however, it may also have been fuelled by drug use, specifically opium, with which he had been anaesthetising his despair. As the music goes gradually over the top, its last movement is more Macbeth than Hamlet, placing the composer at the centre of a witches’ sabbath.

Decades later, Leonard Bernstein saw it as the forerunner of a 1960s musical genre, psychedelia: “Berlioz tells it like it is. You take a trip and wind up screaming at your own funeral.”

On the plus side, the symphony finally did the trick for his campaign to win Smithson’s heart. After he wrote a sequel in 1832, she attended the opening night, abandoning her previous tactic of ignoring him. Her head may also have been turned a little by the numbers of celebrities at the premiere. And maybe there were other calculations involved, because her own career had begun to wane by then.

Superstitious theatre people who wish each other to “break a leg”, for good luck, might reflect that Smithson did indeed break one of hers soon after, and it precipitated her retirement in 1836. In the meantime, in 1833, she became the first Mrs Berlioz.

A few years earlier, the composer had also consummated his admiration for Emmet, Moore, and Ireland in general with a series of songs, Irlande, based on Moore’s work and including an “Elégie” to the martyred revolutionary.

This brings us back to another element of the metempsychosis theory, as explored in a 1980 book on Berlioz, Rational Romantic, by John Crabbe: that Smithson had similarities with Sarah Curran.

Alas for romance, the marriage was not a success. As her career and health declined, Smithson became possessive while Berlioz became unfaithful. They were separated long before she died in 1854, although he continued to support her, and it is to him she now owes her permanent address in one of the most exclusive suburbs of the Parisian dead, Montmartre Cemetery. Her living memorials, meanwhile, include the Symphonie, part of which will feature in the National Concert Hall’s continuing celebrations of the Berlioz 150, early next month.

October at the NCH will also have a belated tribute to Clara Schumann, whose bicentenary we mentioned here last week. Since then, the diary has had the pleasure of an evening in the German ambassador’s residence on Tuesday, where Deike Potzel hosted a 200th birthday party, with a lecture on Schumann’s life and performances of her work.

As I now know, the performers were an advance troop from the New Ross Piano Festival, which starts next week, will include a “Clara Schumann Day”, and is highly recommended. More details are at newrosspianofestival.com