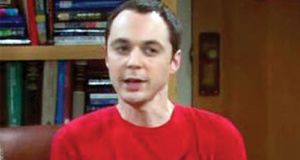 If Dr Sheldon Cooper, a man of Brobdingnagian intellect, hasn’t heard of Swift’s Irish links, what hope is there for the average American?

We can get very touchy on the southern part of this island about people from overseas using a certain ‘B’ word – “British” – to describe anything belonging to us. But a US sitcom, The Big Bang Theory, had an interesting twist on this a while ago, via a rather rarer adjective starting with “B”, ‘Brobdingnagian”.

In case you don’t have a 12-year-old son who watches The Big Bang Theory on a loop, I should explain that it concerns the misadventures of a group of young Californian physicists whose brain-power is inversely proportional to their social skills.

And in the episode in question, the character called Raj installs an enormous desk in the office he shares with chief brainiac-cum-control-freak Sheldon who, outraged, calls it a “Brobdingnagian monstrosity”.

Raj wonders provocatively if that is an “American idiom for ‘giant, big-ass desk’?” Whereupon Sheldon, without enlightening the philistine as to who coined the term, uses the other B-word: “It’s actually British.”

That’s not one of the more egregious examples of the calling-Irish-things-British genre, it’s true. Jonathan Swift was a child of English parents, after all, and although born in Dublin – 350 years ago next week – spent much of his early adulthood trying to get back to the land of his ancestors.

When he finally gave up on that dream, he then lamented that his fate was to die here, “like a poisoned rat in a hole”: a line yet to feature in any Dublin Tourism campaign.

Even so, by the time he did die, he was inextricably entwined with Ireland, its capital city, and its cause. He was also, thanks mainly to Gulliver’s Travels, a world-famous writer. And yet, three centuries later, much of the world seems unaware of his Irish links. If Dr Sheldon Cooper, a man of Brobdingnagian intellect, hasn’t heard of them, what hope is there for the average American?

That’s why the Big Bang Theory’s faux pas gets passing mention in a proposal for a new Dublin visitor attraction, the “Jonathan Swift Experience”, which was recently submitted to the Office of Public Works.

The proposers are the trustees of Marsh’s Library, the 310-year-old institution that houses some of Swift’s books and is itself largely unchanged since the days when he was dean of the cathedral next door, St Patrick’s.

If it becomes reality, the attraction would occupy a third ancient site in the area, the one now being vacated by Kevin Street Garda Station. The gardaí inherited the buildings from the Dublin Metropolitan Police, which had occupied them since 1804. But long before that, they had been the Palace of St Sepulchre, home for centuries to the Archbishops of Dublin.

So in proposing a Swift Experience for the site, the Marsh’s Trustees also foresee a recreation of this part of the Liberties as it existed in Swift’s time, with particular emphasis on such trades as leather-making, book-binding, and printing, around which his life revolved.

This could be a combination of virtual reality and actual workshops. As for commemorating the writer himself, material could range from his real-life love affairs to the fantasy world of Gulliver’s Travels, with – for example – distorted-perspective rooms turning Liliputian visitors into Brobdingnagians, or vice versa.

The finished work would make this part of Dublin a Swiftian campus, building on the existing appeal of the cathedral and the library. It would also end a situation wherein, according to the proposers, “there is no sustained engagement with Swift in his native city”. Hence what they call the “remarkably weak” identification abroad of Swift with Ireland. Hence also The Big Bang Theory’s “pardonable” error.

Pardonable or not, in case the BBT script-writers are reading this, I have a suggestion for how they might revisit the subject with a subtle correction. It involves one of Swift’s satirical poems, from 1733. And although ostensibly about fleas, the text also touches on Sheldon Cooper’s specialty, theoretical physics.

Here’s the relevant verse: “The vermin only teaze and pinch/Their foes superior by an inch./So, naturalists observe, a flea/Has smaller fleas that on him prey;/And these have smaller still to bite ‘em,/And so proceed ad infinitum.”

If that combination of bad personal hygiene and the search for the “God particle” is not a perfect sub-plot for a series concerning socially inadequate physics students, then I’m Schrödinger’s Cat.

The only thing I ask in return is that Sheldon works in a mention of the “Irish” writer Swift. Or “Anglo-Irish”, if he’s being really finicky, which is usually the case.