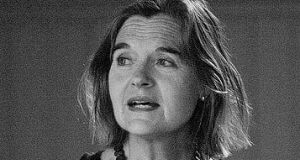 The international Arts and Crafts Movement lost a passionate champion of its cause with the sudden and unexpected death of art historian, Nicola Gordon Bowe from meningitis. Best known for her authoritative biographical books on Irish stained glass artists, Harry Clarke, most notably Harry Clarke: The Life & Work (Irish Academic Press, 1989 and The History Press, 1996, 2011); and Wilhelmina Geddes, Wilhelmina Geddes: Life and Work (Four Courts Press, 2015) – Gordon Bowe was a warm, generous and energetic presence on the Irish arts scene over the last five decades.

Born in Staffordshire, she was the elder of two daughters of Richard Gordon, a passionate advocate for comprehensive education at London County Council, and Elizabeth Smedley, a teacher and headmistress with a strong lineage of female academics and feminists.

Nicola (or Nikki as she was known to her friends and colleagues) was educated at St Alban’s High School for girls in Hertfordshire and took her A levels at the English School in Rome. Failing to pass the entrance exams to Oxford and Cambridge, she opted instead to study French and Italian at Trinity College Dublin (1966-1970), partly because of her father’s family connections in Clonmel, Co. Tipperary. Throughout her life, she remained very proud of these Irish links, never wanting to be known as exclusively English.

As a college student and graduate in the 1960s and 1970s, she fully embraced the artistic life and worked freelance doing book illustrations, murals and painted furniture restoration. She also met her husband-to-be, the garden historian Paddy Bowe during this time at a party in the “Knight’s Flat” in Leixlip Castle. They married in 1974 and their daughter, Venetia Bowe, a professional actor, was born in 1991.

In 1973, she co-founded the (long since disbanded) Irish Victorian Society with her friend and architect Jeremy Williams. It was at this time she discovered the stained glass and graphic art of Harry Clarke and returned to Trinity College Dublin to do an MA and later a doctorate on Clarke’s work under the supervision of the esteemed art historian, Anne Crookshank. She completed this doctorate in 1982 which then formed the basis for later publications on Harry Clarke.

Nicola Gordon Bowe’s research into the life and work of Wilhelmina Geddes began at this time too and she left no stone unturned to understand the complex and unsettled life of this highly talented Belfast-born stained-glass artist the world had forgotten. She travelled widely seeking out examples of Clarke’s and Geddes’s stained-glass windows in churches and war memorials throughout Ireland, the UK, continental Europe, Canada and New Zealand.

Although her fascination for and meticulous research into stained-glass art was what brought her the widest recognition, Nicola Gordon Bowe’s equally assiduous research into the Arts and Crafts Movement and the Celtic Revival in Ireland also had great significance.

She pioneered efforts to have craft and design recognised intellectually on the same footing as fine art. And through her advocacy for overlooked areas of Irish art and design, many lost objects and archives were brought into public collections in Ireland and abroad. For example, she found Harry Clarke’s Eve of St Agnes panels dismantled under a bed and rescued his diploma work from storage in the National College of Art and Design (NCAD). She also campaigned for photographic records of stained-glass art in churches across Ireland and beyond.

Nicola Gordon Bowe was a popular lecturer in art history and an enthusiastic supporter of younger researchers. She began to teach in NCAD in 1979 and in 2000, she founded the MA programme in the history of design and the applied arts at NCAD. Often travelling with her husband on his gardening lecture tours, Nikki was a visiting lecturer and scholar in many art institutions around the world including the National Gallery of Art, Washington; the Getty Research Centre, Los Angeles; the National Institute of Design, Ahmedabad, Gujurat, India and on board the QE2 for the National Trust of America on 20th century decorative arts.

In the late 1980s and early 1990s, she served as Ireland’s representative for an international Unesco study group for Art Nouveau architecture. This role involved trips to annual conferences which gave Nikki the opportunity to meet art historians from Eastern European countries – giving her insight into how the Arts and Crafts Movement fuelled nationalistic dreams in these countries similar to what was happening in Ireland.

Latterly, she was an associate fellow at the faculty of visual culture, NCAD, a visiting professor at the School of Art and Design Research Institute at the University of Ulster and an assessor of the Irish Georgian Society Desmond Guinness Scholarship in the history of architecture and the decorative arts.

In recent years – and since the arrival of broadband in rural Wicklow, Paddy and Nikki divided their time between their Dublin home in Ranelagh and their country retreat in Glenmalure. Just before her untimely death, she had embarked on a book on the Arts and Crafts Movement in Ireland. She had also been asked to write a biography on the Irish stained-glass artist, Evie Hone – a task that now must fall on another’s shoulders.