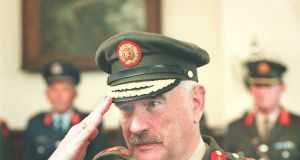 Gerry McMahon, who has died in a Dublin hospital, was a proud Limerick man who was a modernising chief-of-staff of the Defence Forces. He was noted for his ability to apply his formidable intelligence. He combined gravitas with lack of ego, and was admired for not having changed as he was promoted.

When appointed chief-of-staff in 1994, it was suggested he arrive, driven by car, at Army HQ. He was to sit in the back, and the driver was to open the door for him. He flatly refused: he would sit beside the driver, and was able to open a door for himself.

As chief-of-staff from 1994 to 1998, he implemented many recommendations of the Gleeson Report. This was controversial as it meant closing some older barracks. McMahon saw Gleeson as not just improving the efficiency of the Defence Forces, but as improving conditions for their ranks.

His Army career began by accident. At school in the early 1950s, he was told that, being from Limerick, only doctor’s or solicitor’s sons went to university. After his Leaving Certificate in 1953, he applied for various jobs. The Army replied first.

On being commissioned, his first posting was to Athlone, and was shocked at the condition of the Army in the mid-1950s

As McMahon rose through the ranks, he undertook important roles. Among them were chief instructor and second in command at the Cadet School, commandant of the Military College, director of planning and research, and quartermaster general.

He furthered his education, both at the British Army Staff College at Camberley; and at University College, Dublin, where he studied history and economics at night.

He served overseas with the United Nations in Cyprus, the Lebanon, the Democratic Republic of the Congo, and at the UN headquarters in New York. He was instrumental in setting up the military archive.

He supported Irish forces integrating into European structures. He regretted that, during the more intensive period of the Troubles, the Army’s lessened involvement in UN peacekeeping operations.

As chief-of-staff he was open to the media, and held press conferences. He was critical at how the Defence Forces dealt with the hearing loss claims in the 1990s.

With others, including former UDA leader Glenn Barr, he helped establish the Island of Ireland Peace Park at Messines in Belgium, honouring Irish soldiers killed in the first World War.

In retirement he served as chair of the Irish Wheelchair Association for almost a decade, and was also chair of the Organisation of National Ex-Servicemen and Women.

His military expertise was recognised internationally. He served as a board member of the Institute for International Criminal Investigations, the Hague-based organisation which trains investigators into war crimes.

Gerard Alphonsus McMahon was born in Limerick in August 1935, to Alphonsus McMahon and his wife Lilly (née Moroney). His father worked for Lipton’s Department Store. He was the elder of two children of his father’s second marriage, having two half-brothers. He grew up close to the city centre, receiving secondary education at Sexton Street CBS.

Despite living most of his life away from Limerick, he always supported Young Munster rugby club, and regularly travelled to Limerick for matches.

He was a keen hillwalker who enjoyed heading into the Wicklow Mountains. For a year during his studies at UCD, he had studied archaeology. He maintained an interest in the subject, and would regularly visit ancient monuments round the country with his family. He also always liked to bet on horses.

One of his favourite pieces of reading was a prayer from a Greek early Christian saint: “Show me (Lord) the course I should take. Renew in me the gift of discernment, so that I can see the right direction in which I should go. And give me the strength and the courage to choose the right course, even when the sea is rough and the waves are high, knowing that through enduring hardship and danger in your name we shall find comfort and peace.”

He is survived by his wife Ann: sons Garret, Aengus and Félim, and sister Mona.

1 We need to pay very close attention to what is happening in Britain now
2 Irish tourists excluded from visiting Greece as country begins its tourism season
3 Remaking Ireland: Five positives from the pandemic
4 Connell losing touch with the club championship is the real tragedy of Normal People
5 50 things to do in Ireland this summer
Real news has value SUBSCRIBE