Breda Ryan: Leading businesswoman with a generosity of spirit 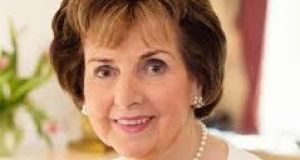 Breda Ryan: when she took her place in Eyre Square when US president John F Kennedy visited in 1963, she was compared by local media to US first lady Jacqueline Kennedy

Breda Ryan, who has died at the age of 86, was a leading businesswoman, mother and grandmother whose influence and generosity of spirit helped to shape the “Galway phenomenon”.

She was the city’s “ambassador to everywhere”, according to The Galway Advertiser which has paid tribute to her unique ability to paint a “bright picture of all” , reaping benefits for tourism, the arts, culture and “bonhomie”.

That “bonhomie” which she radiated was experienced by the many who met her over the years at the Galway summer race festival in Ballybrit, when her family business sponsored the best-dressed contest on Ladies Day. Although she never judged, her keen sense of style was such that if the judging panel made the wrong choice they “wouldn’t be long finding out”, her son Anthony recalls.

Born in Navan, Co Meath, she was reared by Pat and Margaret Fitzsimons in a strongly political household. Her father was a founding member of Fianna Fáil and a senator with the party from 1948 to 1973. Her brother Jim took on the political mantle, serving as a TD for Meath for 10 years, a junior minister in the short-lived Fianna Fáil government of 1982 and as an MEP.

She was employed by the Phoenix Insurance Company after leaving school, and had been seconded to Galway for six months in 1951 when she was spotted cycling up Shop Street, wearing a yellow dress. A young Paddy Ryan was standing in the window of his father’s drapery shop, Anthony Ryan’s. He asked a friend to find out who she was, and the word came back that she was going to a hockey club dance in the Golf Links Hotel in Blackrock, Salthill.

Her return to Dublin would be brief, as she came west permanently after she married Paddy Ryan in Dún Laoghaire, Co Dublin, in April, 1953. She was just 21 years old when she moved in with her mother-in-law, Catherine, with whom she developed a close relationship.The couple had six children – three boys, three girls – but as the family grew older, she became more involved in her husband’s business.

Paddy inherited the drapery shop from his father, and the couple bought Glenard House in 1961, which was refurbished and opened as the Ardilaun Hotel on St Patrick’s Day, 1962. Paddy became involved in politics, the city chamber of commerce, the Galway Races, and Breda served on the ladies committee. Her husband was mayor of Galway when US president John F Kennedy was presented with the city’s freedom on June 29th, 1963.

When Breda Ryan took her place with city dignitaries in Eyre Square, she was compared by local media to US first lady Jacqueline Kennedy. Little did they know that she had spent the morning decorating her mother-in-law’s gate in Forster Street with flowers, flags and bunting, as it was on the presidential cavalcade route. Her husband had asked President Kennedy to wave to his mother – not only did he wave , but the president hopped out of the cavalcade and shook Catherine Ryan’s hand, surrounded as she was by five of her grandchildren and neighbours.

Along with fellow businesswoman Mary Bennett, Breda Ryan founded the Galway Business and Professional Women’s Group 35 years ago. The two women had become friends through shared involvement in the international tourism promotion organisation, SKAL. She was also involved in charity work and in fundraising for her local Catholic church, St Patrick’s in Forster Street.

Her strong faith was that of an “unreconstructed Catholic” , mourners heard at her funeral. Both she and her husband maintained their friendship with former Bishop of Galway Eamon Casey when he resigned in 1992, after this newspaper reported on payments from a Galway diocese reserve fund to US divorcee Annie Murphy and mother of his son, Peter.

She maintained her great sense of optimism even after her husband became ill and died in 2004, after 51 years of marriage. It seemed as if life did not age her, and her energy and generosity of spirit extended to mentoring many people in business. Even after she took ill on a cruise last year, she was able to dance with son-in-law last new year’s eve, and her party piece was Under the Bridges of Paris.

In November 2011, she admitted to shedding a tear or two as she watched President Michael D Higgins’s inauguration speech on television. She had “never voted Labour in her life” until she gave him her number one in the presidential election, she told this newspaper.

1 Donald Trump is in trouble, and that could spell very bad news
2 Penneys will not reopen on Monday despite expected changes to lockdown rules
3 O’Doherty and Waters ordered to pay legal costs of case against State over Covid-19 laws
4 House parties are being held ‘with abandon’, Holohan warns
5 Some larger stores to reopen on Monday ahead of schedule
Real news has value SUBSCRIBE