Hugo MacNeill: Many calling for poll have done little to create circumstances in which it could work 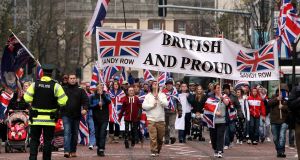 A key, and as yet unanswered or even meaningfully discussed, question for those in the Republic who propose a united Ireland is how would the Britishness of Ulster unionists be incorporated? Photograph: PA

Neither the time nor the circumstances are right for a Border poll on Irish unity. Many of those calling most loudly have done little to create the circumstances in which it could work. A crucially important aspect of the Belfast Agreement remains unfulfilled.

The promotion of mutual respect and understanding between the communities in Northern Ireland and across these islands. This has major consequences for any debate on unity.

The failure to address this lack of mutual respect and understanding has had a profound impact on the conduct of much of politics in Northern Ireland since the agreement. This sits against the commendable progress that various individuals and civic groups have made, coupled with the natural development of a new generation of young people who just want to make their lives in Northern Ireland work – through sport, through marriage between communities, through work and entrepreneurship.

But it is not enough, and without political leadership to drive it further, it cannot be enough. This has impeded Northern Ireland in achieving its full potential. It has also critical implications for issues such as a Border poll on Irish unity in a context where this mutual respect and understanding have not been embedded. It is clear the context in which we now find ourselves has seen massive change in recent years . Brexit. Covid. The pressures on the United Kingdom from English and Scottish Nationalism. These are clearly critically important to this issue but we still need mutual respect.

We have to listen to each other. Then ask what can different sides do for the other?

The Irish Times series last year on the ‘Shared Island’ illustrated the lack of real generosity of spirit or understanding of the position of the ‘other side’ . There were some remarks by nationalist politicians about the need to understand unionist concerns but they lacked any real substance or conviction. Descriptions of Northern Ireland as a “failed state” and “partition” being a disaster for everyone is not a recipe to promote unionist engagement. It is in the same class as the “Curry my yoghurt” insult to the Irish language.

A notable exception was the interview with Taoiseach Micheál Martin who has for many years shown he understands the nuances and complexities of the Northern Ireland issue. He outlined his priority of building better relationships with unionists and why this should be the focus for the immediate future.

That is not at all to undermine the legitimate aspirations of those who would aspire to a united Ireland. But the agreement places the focus on building the conditions in which such aspirations can be achieved.

We know they are not there at present and a Border poll would be highly divisive. Respect and understanding are not only the requirements for the basic aspiration that Northern Ireland should today work for the majority of its people irrespective of identity. They are also essential prerequisites for the longer-term aspirations of both major traditions. On the one hand the Republic is not likely to vote for a united Ireland or closer constitutional arrangements if Northern Ireland was not at peace with itself.

On the other hand, a Northern Ireland that remains in the UK with appropriate respect for nationalist traditions and culture is likely to engender a better relationship between Northern Ireland and the rest of the UK than exists now.

A key, and as yet unanswered or even meaningfully discussed, question for those in the Republic who propose a united Ireland is how would the Britishness of Ulster unionists be incorporated?

There are substantial issues such as the role of Stormont, cultural issues (such as flags, parades and anthems), the role of the monarchy, the NHS, the Twelfth of July and so on and so on.

The Brexit issue has shown the dangers of having a referendum without setting out thoroughly its implications and which is based on the polarised rhetoric of the political extremes. Academic analysis is now being done on the constitutional issues.

Emotions and people are central too. It was very disappointing that a continued seat in the Seanad could not be found for Ian Marshall the Ulster unionist who had started to play a very useful role in explaining Ulster unionism in the Republic.

The generous vision of John Hume was rightly highlighted in many tributes following his death. The late Seamus Mallon aspired to a United Ireland but emphasised the “Shared home place” where he lived with his unionist neighbours. “Their concerns were my concerns.” A point recently highlighted by SDLP leader Colum Eastwood in The Irish Times. We need more of this.

We need generous political and civic leadership. We have to listen to each other. Then ask what can different sides do for the other? We need nationalist and unionist leaders consistently showing a generosity of spirit in relation to the concerns of the other. We also have to explicitly include the continually growing number who are defining themselves as neither unionist nor nationalist. How do we practically build relationships?

True mutual respect and understanding on a “Shared Island” is a huge prize. For everyone.

Hugo MacNeill is the chairman of the British-Irish Association