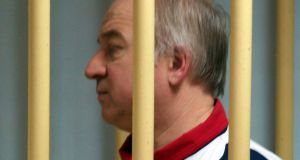 Former Russian military intelligence colonel Sergei Skripal attends a hearing at the Moscow District Military Court in Moscow on August 9, 2006. Sergei Skripal, a former Russian double agent whose mysterious collapse in England sparked concerns of a possible poisoning by Moscow, has been living in Britain since a high-profile spy swap in 2010. Russia OUTYURI SENATOROV/AFP/Getty Images

Besides being accused of trying to subvert the democratic process in the 2016 US Presidential election and the the UK’s EU referendum vote, Russia has also been suspected of interfering in recent elections in France, The Netherlands, Catalonia and Germany. There is also the small matter of annexing Crimea and destabilising the Ukraine.

From the Kremlin’s perspective, this rap sheet against the country is no more than “Russophobia”. As the country’s state-sponsored media has it: “Russophobia is the acceptable face of liberal racism, a form of prejudice that is completely acceptable in progressive, anti-racist western societies”.

It is a prejudice they say that is writ large in the current news reports about - as Russian state media delicately puts it - “the investigation into what made Russian ex-double agent Sergei Skripal ill”. I think we can rule out hay fever.

Mentions of the word have exploded in frequency over social media in the last three days Former MP George Galloway and others - are being wheeled on to television programmes to denounce the crime of Russophobia.

All of which is a classic Russian rearguard action.

And how better to defend yourself on social media these days than accuse your critics of engaging in “phobic” and “racist” language?

The events beginning with Russian interference in the 2016 U.S. Presidential election and up to the Kremlin now disavowing any knowledge of the nerve agent used in trying to murder Sergei Skripal are of a pattern.

Russia is prosecuting an information war - and this is a proxy war being conducted primarily over and through broadcast media and social media.

What we know about Sergei Skripal is that the Kremlin views him as a traitor - he was convicted by a Russian court of betraying for money the identities of Russian undercover agents working in the West.

Speaking on Russian TV in 2010, Putin (who used to be the Director of the FSB - the successor to the KGB) angrily avowed that “Traitors will kick the bucket, trust me. These people betrayed their brothers-in-arms. Whatever they got in exchange for it - those 30 pieces of silver they were given - they will choke on them”.

Which puts Russian media claims that accusing the Kremlin of playing a part in the nerve agent attack on Sergei Skripal is just “Russophobia” into context. And is it Russophobic to ask about the “suspicious deaths” of the dozens of politicians and journalists who were inimical to Putin?

What the Kremlin are correct in though is in exposing the hypocritical moral grandstanding of the West when it comes to Russian malfeasance. The CIA, MI6 and others have all “dealt with” people they view as traitors in ways no different to the FSB. It’s just perhaps that they’re tidier about it and a lot less brazen.

Or as Donald Trump said last year when it was put to him by an interviewer that “Putin is a killer” - Trump’s reply was “There are a lot of killers. You think our country’s so innocent? I think our country does plenty of killing also”.

It was in the Kremlin’s interests to have Donald Trump not Hillary Clinton as U.S. President. As the political scientist, Ivan Krastev wrote in the New York Times: “Russian leaders believe that Washington interferes in their domestic politics and that the United States intends to orchestrate a regime change in Moscow. So, the Kremlin should be able to similarly meddle”.

Russia has seen its former Warsaw Pact allies join Nato and the EU so it is also in their interest that the Kremlin promotes hard right or hard left political parties who are anti-EU and anti-NATO in European elections. A weakened EU is to the Kremlin’s advantage.

But how much enabling is going on here?

There have been fulminations aplenty from UK politicians over the Skripal case - Boris Johnson has branded Russia “a malign and disruptive force” but there is a disconnect here which the Russians are all too aware of.

In 2006, the former Russian spy Alexander Litvinenko was murdered in London by way of radioactive poisoning. Then Home Secretary, Theresa May ruled out a public inquiry into the murder, saying “it is true that international relations have been a factor in the government’s decision-making”.

Three High Court judges then ruled that the reasons given by Theresa May “did not provide a rational basis for her decision”.

When the public inquiry was eventually held in 2016, it found that Litvinenko was murdered by two Russian agents. In the words of the inquiry chair, Sir Robert Owen, “the operation to kill Mr Litvinenko was probably approved by President Putin”.

No economic sanctions, no travel bans, no nothing were put in place against Russia. As Prime Minister David Cameron said at the time “We have to weigh carefully the need to take measures with the broader need to work with Russia on certain issues”.

The Russian ambassador was no doubt called in and given a jolly good dressing down. But Russian oligarch billions remained in London banks.

Whoever attempted to murder Sergei Skripal and his daughter Yulia will have been aware of the UK’s “broaders needs” when it comes to dead Russians on their doorstep.