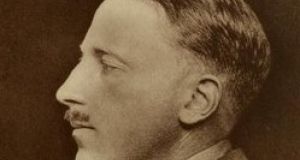 Flu may have been at least indirectly responsible for the still-mysterious demise of Maj Robert Gregory, the ‘Irish Airman’ who, in the title of a famous poem by WB Yeats, foresaw his death

There was nothing especially Spanish about the Spanish flu: the global pandemic that, in two years beginning a century ago this month, killed more people than the first World War.

The name was an accident of war-time censorship. Since the US, UK and other combatant countries had restrictions on reporting bad news at home, the first cases many people read about were from neutral Spain, where a celebrity victim, King Alfonso XIII, featured prominently.

But the Spanish in their turn gave the illness an Italian name, the Naples Soldier.

This was the title of the show-stopping number in an operetta, La Canción del Olvido (“The Song of Forgetting”), whose Madrid run coincided with the first major outbreak there.

The librettist is said to have joked that the Naples Soldier was “as catchy as the flu”. The association stuck.

And I was reminded of the Naples Soldier recently when reading that flu may have been at least indirectly responsible for the still-mysterious demise of Maj Robert Gregory, the “Irish Airman” who, in the title of a famous poem by WB Yeats, foresaw his death.

That death happened on January 23rd, 1918, in northern Italy. Ever since, it has been most often attributed to “friendly fire”, or more specifically to Gregory being “shot down in error by an Italian pilot”.

The latter phrase was even used by Yeats himself once, to Maud Gonne.

But I see that, at last October’s “Autumn Gathering” in Coole Park, where admirers of Yeats and Lady Gregory (Robert’s mother) meet annually to discuss literary and related matters, the phantom Italian was for once and all exonerated from any blame.

Among the speakers at the 2017 event was Geoffrey O’Byrne White, a descendent of the Gregorys and himself a pilot, who declared categorically that Robert had not been shot down, but that he instead just lost consciousness at the controls, probably as a reaction to a flu vaccination.

“He had been inoculated on the morning of his flight,” O’Byrne White told the audience (as quoted by RTÉ). “He probably passed out at high altitude in an unstable aircraft. It was the inoculation that killed him, in my view.”

This would also have been in keeping with a letter Lady Gregory wrote to a friend in 1918, soon after hearing of her son’s death, in which she said he had been returning from enemy territory “when at a great height they believe he fainted and did not come back to consciousness in this world”.

Although Yeats wrote no fewer than four poems about Robert Gregory, An Irish Airman Foresees His Death remains by far the best known and loved. This is despite, or maybe because of, it being the least biographical of the quartet.

Reprisals, for example, mentions that Gregory had shot down “nineteen German planes” before his own demise, while In Memory of Major Robert Gregory praises his feats as “soldier, scholar, horseman”.

An Irish Airman, by contrast, has almost no journalistic detail.

Indeed in some respects, it’s not quite true to the facts.

The philosophical indifference to the war it attributes to the poem’s hero, for example – “Those that I fight I do not hate/Those that I guard I do not love” – is probably a misrepresentation. And like so many “Big House” Protestants of his generation, Gregory would have had a strong sense of “duty”, although the poem suggests otherwise.

As for foreseeing his death, although that’s a mere fictional device, he surely did, in a general sense at least.

You couldn’t be a pilot in the later years of the first World War and not suspect your end was imminent.

The aircraft themselves were a challenge, never mind the enemy.

Still, Gregory must have assumed that, if and when he went down, it would be with guns blazing, and not already oblivious to his surroundings.

I’m not sure if he can be officially numbered among the multiple millions – at least 50 but maybe 100 – who died as a result of the Spanish flu. But I’m also reminded of a much less sophisticated piece of poetry from that era, which hints at another phantom Italian, and is quite telling in its own way. One measure of a pandemic in former times was that there would soon be a skipping rope rhyme devised to suit.

So it was in 1918, apparently, when with chilling understatement, children used to chant: “I had a little bird/His name was Enza/I opened the window/And in-flew-Enza.”