Alice Leahy: Murder inspired me to devote my life to homeless people 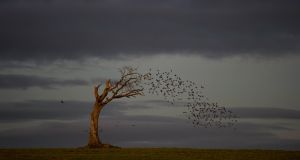 The night before Seán Armstrong was murdered, a man dreamed of an oak tree being felled and little shoots coming up all around the fallen tree. Photograph: Mark Marlow

It was a bit like falling in love. I can still see Seán Armstrong sitting on the floor in a small bedsit in Dublin’s Berkeley Road. He had a brown beard and his eyes shone with enthusiasm as he talked about his work with children and young people in Northern Ireland.

We sat rapt as he talked about his work as a field officer with Voluntary Services International (VSI) in Belfast, where he organised children’s parties and holidays for Catholic and Protestant children.

He was someone who made us all feel like we could do great things, make a difference, change the world. It was 1972, a time when human rights movements were gaining ground and a generation was questioning how society was organised.

Sometimes people make an impression on you that stays with you for the rest of your life, even if your paths only cross once, just briefly. Seán was that person for me. I only met him once, that night in the bedsit, where I was sitting with other members of VSI, listening to him talk about his work in Northern Ireland.

Founded in Switzerland in 1920 as a peace movement, VSI opened its Irish branch in 1965. Tenement living was still a feature of life in the city in the 1960s. Dublin had a legacy of dire poverty.

I met VSI members working in the flats in Benburb Street and joined the organisation in 1971 when I was working as night sister in Baggot Street Hospital. VSI gave young people like me the opportunity to get involved in practical work to improve people’s lives, and there was a fun social aspect to it.

We wallpapered and painted the apartments of elderly residents. We fixed broken things, saw the gaps and tried to bridge them.

The VSI felt utterly democratic. I can’t remember anyone being defined as the head person and that was part of what made it so energising.

In June 1973, months after I’d met him, Seán’s new wife opened the door of their flat in Belfast’s Eglantine Avenue to a stranger. The man walked up the hall of the flat, according to Seán’s mother Dr Hylda Armstrong who was interviewed by journalist Alf McCreary for his book Profiles in Courage.

The man asked Seán “Are you Robert Seán Armstrong?” Seán said yes, thinking the stranger was a parent of one of the children with whom he worked. The man pulled a gun and shot Seán once in the stomach and twice in the back as he tried to escape into the bathroom.

No one has ever been convicted for the killing.

I woke up in Dublin to the awful news of his murder on the radio. I felt sick, with a stomach-churning sense of shock and loss. It made no sense, given that I had only met Seán once. But I walked around the city that day in a daze.

The numbness lifted and I felt the reality of his death during the outpouring of sorrow at his funeral service in St Anne’s Cathedral in Belfast. Seán’s wife told the funeral service about a dream a friend of Seán’s had had the night before Seán died. The man had dreamed of a huge oak tree being felled and little shoots coming up all around the fallen tree.

Seán’s death made me question my own life. His murder was as hopeless and pitiless a death as anyone could imagine. It brought home the seriousness of life for me. Losing someone so young (Seán was 31), who seemed so full of life and potential, was the shock I needed to see that life was short.

The vision of little shoots growing up around a fallen oak stayed with me. Seán had tapped into something in my psyche, the vague but strong feelings I had about overcoming obstacles and divisions.

As a senior nurse in a high-powered, stressful role in a hospital, I was helping people, but I was doing it from the confines of a strict hospital system. Seán’s death was the spark I needed to step out of those shoes and leave the only working world I had ever known.

I resigned my post and went to live in the Simon Shelter on Dublin’s Sarsfield Quay.

This is an edited extract from The Stars are Our Only Warmth. A memoir by homeless activist Alice Leahy, it is published by O’Brien Press at €19.95 All royalties go to the Alice Leahy Trust

5 Five habits learned during the pandemic that we should keep