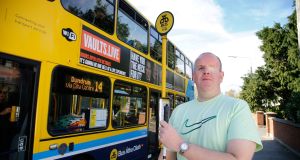 Dublin resident Tony Murray, who is blind, says he faces a tougher commute due to the effects of the BusConnects plan. Photograph: Nick Bradshaw/The Irish Times

Dublin desperately needs an integrated and efficient transport system. The population of the city is projected to grow by one-quarter by 2040 and the existing slow and unreliable bus service is incapable of meeting the demands that will be placed upon it. Anticipating that situation, the National Transport Authority (NTA) is advancing a plan – BusConnects – designed to provide speedier, more frequent services.

Already, commuting by car has developed into a congested nightmare for many workers. The Luas and Dart services have reached capacity at rush hour. It will take years to realise the planned Metro system. And there is universal acceptance that bus services are, in most cases, seriously inadequate. In such circumstances, reconfiguring the existing bus network to meet rising demand makes sound social and economic sense.

Disturbing established precedents in the provision of public services is a sure-fire guarantee for political trouble. The situation was no different on this occasion. Those individuals and communities affected by route alterations; by a requirement to transfer to other buses or who faced the loss of garden frontage to bus corridors complained to local politicians. In response, six senior ministers, including Taoiseach Leo Varadkar, along with opposition politicians, made representations on their behalf to the NTA. That is a normal and valued part of our democracy. Their observations will feed into a revised BusConnects scheme, to be published early next year.

Consideration for those discommoded by a reconfigured bus system should not, however, swamp the requirements of most citizens for a faster and more efficient service. Jobs and economic development depend on it. Designer of BusConnects Jarrett Walker observed that a system designed around the needs of senior/disabled people would be too slow to be useful to the rest of the population. That may be so. But the design can be tweaked to minimise the impact on vulnerable people while catering for the needs of the many. Change can be painful but communications, consensus building and common sense can help.

1 Ireland has strategy to ‘break the chains’ of coronavirus - WHO’s Mike Ryan
2 Cheltenham faces criticism after racegoers suffer Covid-19 symptoms
3 UK makes another coronavirus U-turn but doubts over strategy linger
4 Are holidays booked for July and August going to happen?
5 No signs of lock-down fatigue in Ireland ... yet
Real news has value SUBSCRIBE